Benny B said:
The wounded cow lay down,
trees and streams climbing over its horns.
Its muzzle bled in the sky...

Tell the roots
and that child sharpening his knife
now they can eat the cow.

Above them, lights
and jugulars turn pale.
Four cloven hoofs tremble in the air...
Click to expand...

I dunno maybe it sounds gd in Spanish

Could you run a knife across the throat of a beautiful cow so that the circle of life may continue, woops?

luka said:
The problem is they are so overwrought and hysterical.
Click to expand...

Benny B said:
Could you run a knife across the throat of a beautiful cow so that the circle of life may continue, woops?
Click to expand...

No doubt while wearing special trousers & the cow's already been speared half to death in the blaze of noon, a redemptive enactment of a ritual as old as time etc

Pah, what I see is a refusal to meet the poem on its own terms, namely OTT poems about DEATH that puts the knife in the reader's hands. Blood all over the place.

Also, it's an acquired taste I suppose

'Emotional' poems can be a bit wet, I agree, but there's nothing wrong with putting a bit of blood and guts into it

My partner writes poems on WhatsApp and just sends them to me to save them, hardly ever writes them down. She just sent me this which she composed on the way to the supermarket and I like it a lot.

to celebrate without trembling

tremble without celebrating, how many trembling celebrations? how many lives trembling.
how much is the barrel, the trembling barrel of wine, live.

No, I don't think there's any 'tremblings' involved (or maybe there is, where did you get that from?). It's a poem about alcoholism, apparently.

Only three verbs - to drink, to live, to see.
And two nouns - wine and barrel

I wouldn't like to try and translate it tbh, pretty much impossible.

One of various possible bad 'literal' translations would be:

To live without drinking

To drink without living, when I drink I live? When I live I drink?
When I see the barrel, I drink wine, I live

is the dewdrop world​

Maybe you could shorten this one even further

The dewdrop world -
And yet -

The ... haiku, which was one of over 20,000 that he wrote during his lifetime, was composed following the death of his young daughter. In it, he refers to the popular Zen image of the dewdrop world, the reflection of reality. This image might give us cause to take refuge in the emptiness of things, ‘and yet,’ writes the grieving poet, and the suffering, deluded human; ‘and yet…’

I thought desire would kill me
and the one I love would never know.

Letter of mine, read out salaam
to my unnamed one,
tell them, dear letter:

“The hand who wrote me for you
its soul suffers in torment —
if you read me,
take pity on my writer,
have mercy,
and write back.” 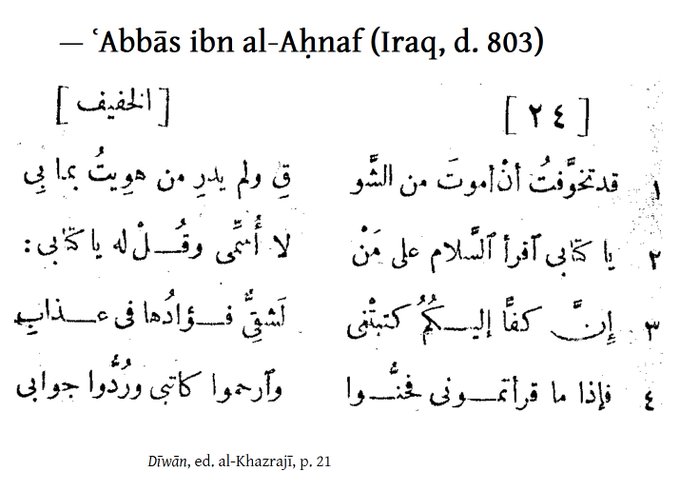