That's basically it, the prosaic title tells you pretty much everything. Except the price on the door... which I myself don't know.
Anyway, Ferro Bar is a pretty cool spot on the edge of the hill by the bridge thing, it's Liza and I playing whatever the fuck we want all night for the first time in ages which should be... interesting I hope. I love the picture they have selected for it (an action shot from our first visit to Porto to play at Passos Manuel). 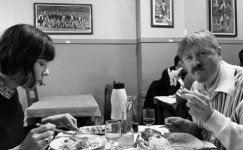 Then, on Saturday we are playing at a restaurant called Torto - but it's a restaurant with a dancefloor and it's open until three so should be pretty good too I reckon.

that's a nice picture, do you guys have some sort of 50's cosplay thing going on?
V

Rich looks a bit like Ray Winstone there. We've interrupted his meal and he's about to launch himself across the table.

yyaldrin said:
that's a nice picture, do you guys have some sort of 50's cosplay thing going on?
Click to expand...

No, but it is a weird shot, I am wearing a second hand jumper thing, I actually don't know what era it's from to be honest, could well be fifties and it looks as though Liza has on some kind of retro dress so seems as good a guess as anything really. I remember that evening cos it was the first time we went to Porto, just before the pandemic and the rules properly kicked in, the club where we were dj-ing took us out for dinner there, it's a fairly standard looking place right down to the photos of the footie teams on the wall.

It would have been sort of appropriate if we had been dressed 50s deliberately cos the building which holds Passos Manuel itself is done in that Art Moderne or Art Deco style which was big in the 40s and probably 50s too I'd imagine. 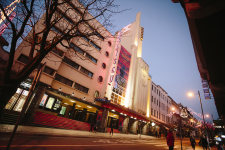 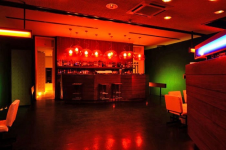 The building opposite is super-cool though, I think it's supposed to look like a trombone or something if you stand in the right place. 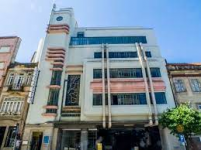 I'm really looking forward to this - should be one of THE best work events we've done for ages.
T

you've mastered the art of turntablism on the gak right?

Oh and there's an extra four words I didn't even see at the end there.

Gonna show off I'm afraid but this really made my day... just got up and got a coffee at the hotel bar and one of the staff walked over and said "I saw you guys dj last night - your set was amazing, amazing, amazing!" - three amazings! Big smile on my face now.
I said, we're playing again tonight at... and she interrupted me and said yeah I know at Torto.

Oh and someone just came up to us eating an incredibly hipster breakfast (eggs benedict with fig and mint juice to drink) and said how much they liked it.
I'm really happy now.

That breakfast was such a rip-off though... brought me right back down to earth.
@Leo we are in Materia Prina or whatever the fuck it's called... also really expensive but they are doing business hand over fist... so busy with people queueing up to buy piles of sevens starting at 15 euros and massive art books with seven pages that we can't have a chat with the guy. We really popped in to say thanks for booking us before... well, and to look at records but I can't afford anything.

I love that store, @IdleRich, occasionally buy stuff from mail order. I've exchanged emails with Nuno and Hugo. I'd ask you to give them my best, but they won't know me as Leo.

The only one here is called Carlos, think he is the owner?
I love that they have a section called "For Daring DJs" to sell the, er, less danceable dance music to people who don't want to admit they are the cowardly kind who play stuff people might like.

Apparently Hugo comes in to pack the orders up three mornings a week.

I love my ancestral homeland.

You would be welcome here anytime!
I imagine so anyway, they are quite a friendly lot.
Porto is really different from Lisbon though... it's actually way more hipster with loads of brunch places and craft beer bars. I really don't know what to think about that... on the one hand I didn't move to Portugal to experience a cut price version of Dalston ten years ago... on the other, there are things - like eggs benedict - that you actually would have to seek out in Lisbon and I like the fact it's so easy to get here in Porto.
I guess that, on the whole, this worldwide hipster homogenisation is not a good thing. And Porto is way further down that road than Lisbon...

we were in Portugal 13 years ago, and found Porto to be edgier than Lisbon. Not unsafe per se, but we felt slightly less relaxed as we wandered different neighborhoods. musically, I think it's got a reputation for being more experimental and adventurous.

Dunno actually... cos I hang out in Lisbon a lot I have seen dodgier places there, but that's not to say my experience is comprehensive.