What would you do if you went outside?

luka said:
Don't you ever go home to your family?
Click to expand...

tbh i should spend more time on the plot
S

mixed_biscuits said:
A friend and I once played the left- right game for an entire afternoon: we ended up in an infinite loop on the outskirts of Oxford, waiting for the only thing which could break us out of the loop, which was a police car (which did eventually appear).

The London lazy version is the next-bus game: you get on the next bus until you see someone wearing a yellow jacket whereupon you must leave the bus and walk to the nearest bus stop (in either direction) and take the next bus there.
Click to expand...

i'm going to go up the empire state building one day. i can see it outside. maybe you could also try to go up something high when you go out. like a hill.

im actually on a hill now

Are you running up that hill?

I'm in a house on the hill. According to Barty it's very near where Kate Bush wrote some famous songs though

he means a spiritual mountain top.

I'm looking after someone's house and it's on a hill. It makes a nice change from my house which was sort of getting me down. It's got a rooftop balcony. I can see right into a Tesco metro opposite

so you said to this person who's house it is i'll make a deal with god and get him to change our places?

mixed_biscuits said:
It's called the Left-Right Game
Click to expand...

The text-based RPG equivalent of a derive?

Clinamenic said:
The text-based RPG equivalent of a derive?
Click to expand...

Clinamenic said:
You'd be able to type "Spraypaint a penis on the pharma billboard"

you could type "use spraypaint on billboard"

you would get 1000 bonus points for replying "never work"

And then the game would stop working.

you wouldn't care though cos it would be utopia outside

Pour rum at the crossroads and talk to spirits. Best option tbf.

I'd probably think "Bit nippy, innit" and the go back indoors where it's nice and warm. 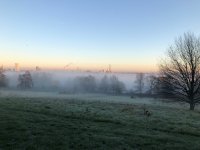