Next 'Big Power Switch Off' set for the weekend

dunno what's not to like.
it would be cool if a big power surge at 10 past 7 fried the network and/or spanked the energy providers?
but i feel sceptical there must be a catch

The catch is that we need to be sedated for the entire duration.

aren't rising prices due to supply and demand on the global wholesale market? is the local provider at fault?

Leo said:
aren't rising prices due to supply and demand on the global wholesale market? is the local provider at fault?
Click to expand...

only for being blatant profiteers

sufi said:
only for being blatant profiteers
Click to expand...

I know noting about your energy providers, so apologies for the dumb questions. is passing along costs -- a company charging more when their costs rise -- an unusual business practice over there?

The backdrop is fast-rising global energy prices, especially for natural gas. They are painful for many countries, but particularly so for Britain. Since oil and gas were discovered off its north-east coast half a century ago, gas has generated much of its electricity and heated almost all its homes. But North Sea gas is running out; and as Britain has replaced coal-fired plants with wind power in order to reduce carbon emissions, it has become painfully dependent on natural-gas imports, especially in calm weather.

Compounding the problem, during the past decade the government has allowed upstart suppliers to capture a significant slice of the retail energy market with business models that left them ill-prepared to weather market turbulence. Now, in the run-up to the COP26 climate conference in November in Glasgow, Britain must choose between letting its energy market collapse and offering vast subsidies for fossil fuels.

The origins of the mess lie in the 1980s and 1990s, when privatisation created an oligopolistic energy market dominated by the “Big Six”, which paid their shareholders juicy dividends and their bosses fat salaries. The government responded to anger over high energy bills with further liberalisation, which created a fragmented market (see chart). Some of the new entrants were innovative, such as Bulb, which offers consumption-tracking apps, and Octopus, which discourages consumption when demand is high with dynamic pricing. But most were thinly capitalised and produced no energy, merely buying it on global wholesale markets and selling it on. Some paid little attention to ensuring continuity of supply or hedging against price fluctuations. 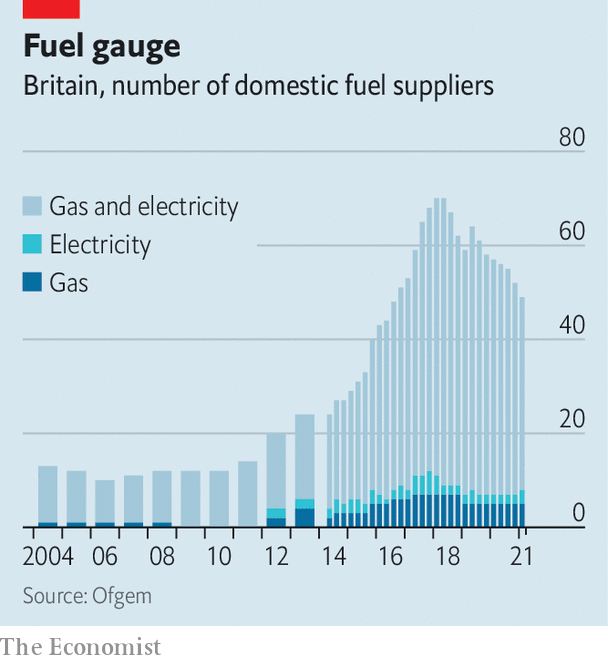 Such me-too operations were always vulnerable to a demand squeeze. But the risks rose in 2017 with the closure of a big gas-storage facility, which left Britain able to store just 2% of its annual demand. Other big gas importers, by contrast, can store 20-30%. And the risks rose further in 2019, when the government capped consumer prices in response to continued grumbles about high energy bills.
The perfect storm came this summer. As pandemic restrictions eased, global demand for energy rose. Gas supply in Russia, a big producer, was disrupted, and unusually calm weather stilled British wind turbines. In August Ofgem, the industry regulator, said that from October the price cap would rise by 12%. But since then the wholesale price of gas paid by British energy firms has risen by more than 70%. The result is that British energy firms are tied into contracts to supply gas to households at far less than they must pay to get it. Seven have failed since August, and industry insiders say that without government intervention, dozens more will. Ofgem, says the boss of one of the bigger firms, has been “asleep at the wheel”.

yeah so i'm intrigued by the suggestion that consumers causing a big surge would be costly to providers - i can imagine that type of revenge attack would be satisfying, but i can't see why it would be effective, except i suppose as a demonstration of power, like a threat,
consumer/corporate relatiopnships are getting stressed, not so cosy now

The Switch Off is thought to impact shareholders of energy companies' in a national call for action on rising energy costs. A second date has now been announced for another blackout on Easter Sunday to continue the protest.

Calls are being made for everybody to switch off all electricity in their homes on Sunday, April 17, at 7pm for just 10 minutes. It's thought that just 10 minutes could be enough to hit companies hard and "show the Government we can organise legal silent collective action without leaving home".
Click to expand...