Friendship between Invisible Sounds and Tolouse Low Trax started when Tolouse Low Trax invited Invisible Sounds to play in Salon des Amateurs back in 2014, since then they have dj-d together several times at Salon and, notably, they brought him to Lisbon to DJ at Music Box in 2019. Now TLT and Invisible Sounds team up once again and invite TLT to play to live shows, first in Porto at Ferro Bar on the 10th of June and then at Arroz Studios in Lisbon on the 11th for a reunion in sound and body. Get ready to dance to something rough around the core, in live form from Tolouse Low Trax, and before and after that via the selections of Invisible Sounds.
Tolouse Low Trax aka Detlef Weinrich’s ethic branches off in his multiple releases on labels as Idle Press, Inﬁné, Karaoke Kalk, Kunstkopf, Neubau, Themes For Great Cities, Antitote or Cómeme. The German producer isn’t a newcomer of the scene for sure: still an active member of Kreidler, he is the man behind Dusseldorf’s infamous Salon des Amateurs. His productions as Tolouse Low Trax explore Afro-Baroque elegance through obscure arpeggios, slow release hypnosis turns genres’ into blurry scenarios in which you easily lose yourself and when you want to go back, it’s too late.
RELEASES
Boarding To Rio [Amontillado Music]
Mask Talk [Karaoke Talk]
Corridor Plateau [Apparent Extend]
Tolouse Low Trax / Noblesse Oblige - Asimiad [SD Records]
Dweller / Second Trip [BECO DSL]
Jeidem Fall [Karaoke Talk]
Untitled [Karaoke Talk]
Tolouse Low Trax / Nicolàs Guagnini - A Song And A Photo Novella [Porcelain And Volcano]
Kadiz [Kunstkopf]
Rushing Into Water [Themes For Great Cities]

I have to hand it to Lizatron, she is just such a good organiser. For most of our recent events she has dealt with the artist and the venue and, as a rule, arranged the terns of the whole thing - I pretty much just turn up on the night and spin some records. Which is great, but I am actually starting to feel a bit guilty.

Even when I do more than that I'm normally working within parameters that she has set eg it might be that I have to sort out the flights for an artist - but seeing as she will say "You have to buy a ticket from x to Lisbon on the Friday and a return on the Sunday" it means that even there I'm not required to show that much initiative or expend that much brain power.

Why am I saying this? It's just cos I want to make it clear that when I say I'm impressed by how much stuff we are doing at the moment* and how it's amazingly well organised etc etc, that I am not bigging myself up or showing off, but rather I am just expressing my admiration for what she has achieved - and also my gratitude for how much I am getting out of it myself.

This really struck me today when I went out sticking up posters today for the June event with Tolouse Low Trax and I realised how many of the other posters on the walls said Lizatron on them somewhere. It's quite interesting cos I think that a lot of people have decided that once you have the internet and you can promote events on Insta and so on for free, then the money and time you spend on getting someone to design a poster (and in Portugal I'm afraid that does also involve nagging the fuck out of them every day once they've missed the deadline) and then getting loads of them printed and then collecting them and getting them on to the walls is not cost effective. And perhaps in one sense that may be true - however, I think that with such a small city you can cover the important bits pretty quickly. And the result is that people just keep on seeing it and being reminded. Lots of people have told us how they seen the poster for x and y thing that we've done, and just anecdotally, I feel that as fewer people seem to put time and effort into posters, if you do good ones then the value they have is increased. Also, when Lena arrived and we were walking round together you could tell that she was sweetly pleased to see them and to understand how much effort we had made (again, I say "we" but all I did was drive Liza to pick them up from the printer) and, cos she liked the design, she specifically asked to have one for herself. For that reason we will hold a few back and put them up just before Detlef arrives - I guess I'm hoping that he will also be pleased and that a happy artists leads to a good show.

But overall, it's just typical Liza - while other people are arguing about whether or not to do it she's already mixing up the glue in a bucket and getting them on the fucking wall. I think I can at least claim that when she was putting them up with me we were more efficient than the previous team who had to stop for a beer, a line and a hit of g every ten minutes or so. 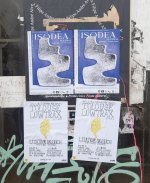 *lately it seems that we have kinda fallen into doing a big event with a guest every single month, as well as playing numerous guest slots and one-off things at various places, a regular monthly night at Cosmos, our radio show - oh and there is selling records for the label, and additionally Liza is selling a load of t-shirts for Taishi and she is organising this festival next weekend and she is now working for Repeater Radio.......