some good PSBs singles, this is the best


the other INXS banger

I love that one of course but - maybe this is a better way to put this - it's electropop rather than electro meets pop.

As an aside, the first time we dj-d in Dusseldorf, by 6am or so we ended up playing sort of back2back or just chaotically - whoever drunkenly grabbed the controls played the next record kinda thing - with Detlef (Tolouse Low Trax) and I reached for that one to play it and he said "No! It's too Dusseldorf" and basically ordered me not to play it.

I don't mean to be ungrateful saying these suggestions are wrong here chaps, apologies if I'm coming across as rude. My fault in that I probably didn't name this thread well or make it clear what I wanted. I've thought a bit more and maybe a better way to describe it might be to say that I guess I'm looking for things where someone took the sound of electro as in those Street Sound Electro comps and married it with a full on pop tune to create a bastard mongrel hybrid that somehow flukily works.

Does anyone know those Funky Alternatives comps? They are sort of electro/postpunk, I suppose I'm talking about that but more silly. Although this is on one of them and you can't get more silly (or annoying) than this

i have heard this song every day for the past ~8 months. it's getting pretty grim.

How come? Have you been captured by US military intelligence and subjected to torture?

Heavily playliisted radio is a fucking nightmare, one summer holiday from unversity I worked in a warehouse where they put Radio One on all day. The playlisting at that point (and maybe at this point too, I dunno) was so strong that if there was a song in the top "heavy rotation" section or whatever you want to call it, it would be played about six times a day. And if you were in a warehouse working from, I dunno, eight until hialf four or something, then you would likely catch it almost every time - cos the evening shows were when the specialist djs who were exempt from the playlisting were on, so all of the sixteen plays had to be sandwiched into the hours in which the non-specialist djs (ie djs who had no real interest in music such as Chris "the complete and utter fucking cunt" Moyles. I wonder what he was interested in to be honest, why were stupid pricks like that put in a position where they could bellow at us moronically day after day from what was supposed to be a music channel?) were on air. So there were a load of songs that I heard approximately sixty times a day, every day, for about two months. Now that's enough to make you hate a song you liked to start with. And songs you hate to start with... Dodgy - Good Enough For You or whatever it's called was already amongst the songs I hated the most. But, to this day, if I hear it I will automatically go into a catatonic state, shitting and vomiting uncontrollably... can be embarrassing if I am in a shopping centre or such and it comes on their pa.

Actually, this is working out rather neatly - I created the nuggets thread to prevent any distraction to this one, and then started talking about Kim Fowley which reminded me that he did a song perfect for this... it's electro, it's pop, it's got humour - and I'm amazed The Normal never sued.

This one more like country meets electro. To be honest I'm not totally sure it even fits my spec cos although he sort of raps and it has the sinister synth it lacks the beat I really want.

Still, what other chance will I ever have to play this absolute monster on dissensus eh?

There is a track on this comp bwlôhmbbyyyy7uy7mo.ymommmMmlMmlmm

I'm not sure this is silly enough ( although the orientalism would be considered stupid nowadays ), but it has an electro-ish beat, it's pop, and it's a one hit wonder


Blancmange - Living On The Ceiling

IdleRich said:
There is a track on this comp bwlôhmbbyyyy7uy7mo.ymommmMmlMmlmm
Click to expand...

I dunno what happened there.


william_kent said:
I'm not sure this is silly enough ( although the orientalism would be considered stupid nowadays ), but it has an electro-ish beat, it's pop, and it's a one hit wonder


Blancmange - Living On The Ceiling

full on orientalist visuals - the colonial studies crew could have a field day with this video
Click to expand...

I reckon, come to think of it, that it is in the right ballpark. I remember that being played at primary nschool discos when I was really really little but I know very little about the band. I have heard a few things said which make me think that they have some good songs out there.
In fact I believe @grave recommended one of their tunes just before I was leaving to Lisbon... but what tune was it? Did I listen and was it any good, I wonder to myself....

bunnyhausen said:
Not totally sure what the brief is here but I've got a feeling this might fit the bill
Click to expand...

I didn't explain well... cos I didn't really have that good a handle on it myself probably. But just maybe I have a somewhat better grasp now.

I suppose what I'm saying is that I have noticed that there are a number of tunes that came out in the 80s and which were kinda unique in their sound but which had something which made me join dots between them.

The dots I joined were when me they all sound like someone from a pop band heard those street sound electro comps and got all excited and decided to "go electro" so their next tune was a mix of pop and electro. And normally for some reason these songs had some humour in them. And nine times out of ten, the goood tunes tended to be (or at least, to me they sounded like) catching lightning in a bottle, and so they were hard to follow up, hence they tended to be one hit wonders. And that's about it really I'd say.

Anyway, licking my lips over your selections regardless of whether they happen to fit into my particular brief or not cos you have been consistently blowing my mind with your choices for more than twenty years now!
Last edited: May 30, 2022 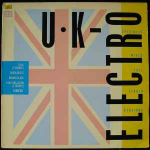 just the other day I was looking at the credits for the Street Sounds UK Electro album on discogs and read this:

Release consist of demos recorded by Martin Jackson (Magazine) and Andy Connell (A Certain Ratio) plus a further track that Mastermind (7) (who mixed the “Electro” albums) recorded under the name of The Rapologists which Street Sounds released as an "various artists" collection. Jackson and Connell went on to form Swing Out Sister

No way am I posting a Swing Out Sister tune though....

again, don't know if this fits the bill, but it's trying to be an electro pop song ( in a mannered early 80s student disco style )

does this fit? Im thinking because of the staccato choral synth hook which is quite electro

electro/pop as opposed to electro-pop