Any manual labourers on the forum? What's it like?

I assumed this was going to about some politically iffy "noise music" project.
S

when i worked in a factory, production line kind of thing, i ended up with these massive muscular hands. they were behemoths. unfortunately this isn't the set of muscles that girls are traditionally attracted to. but they were hench

i was a farm worker for a bit when i was about 18, frankly it was a bit dangerous and absolutely knackering. might be alright if you did it for ages and got used to it. i guess more or less anything is different if you do it for years rather than months.
W

I was on the tools- though not "manual labour" in the sense you mean- for most of my twenties. it was great in the summer and shit in the winter. I was on the hod for a bit in my teens and that was shit though.

Have you got a garden? Thats a good graft. Just remodel it for no reason

@luka is Slaving at hot typewriter, etc, as I write this. get sore fingertips sometimes

woops said:
@luka is Slaving at hot typewriter, etc, as I write this. get sore fingertips sometimes
Click to expand...

Dip them into Craner's Secret to cool them down?

during two summer during college, I worked in a cardboard box factory. they would get deliveries of huge sheet of cardboard, and we'd have to load them on to one of a half-dozen huge cutting machines which would cut them into different size boxes. the flat cut boxes would come out the other end, and my job was to tie them into bundles of 10 or 20.

the tying was done with a nylon twine, and you had to wrap it around your hand, tie the knot and pull to tighten it. and you'd do it for about eight hours a day. when I first started, the twine would cut into the side of my right hand (cut hands!). eventually, the hand would toughen up but man it was painful at the beginning.

worst/best job I ever had. started at 7:00 am, worked until 5:00 pm in a hot factory, half day on Saturday, physically exhausted after each day and would sleep like a baby at night. worst because it was grueling, quasi dangerous (huge cutting machines with enormous blades), and a bit soul crushing to think about a few guys who had worked there for 10-20 years. but also the best for that very reason: opened my eyes to what lots of people do to make end meet, and gave me a better appreciation for what I had.
Last edited: Jun 14, 2022

,I was a builders labourer for years. And a painter and decorator. Wouldn't want to do it now. Too old

luka said:
,I was a builders labourer for years. And a painter and decorator. Wouldn't want to do it now. Too old
Click to expand...

Have you written any poems themabouts?

I once spent about a week putting in a bathroom for someone with this random bloke who I never saw eat a single thing the entire time. He just smoked and drank cans of cherry coke. Quite enjoyed it but I can see how it could become a bit of a grind long term, especially if you pick up an injury or two.

My brother's a tree surgeon and he's permanently covered in scratches and bruises, getting thorns stuck in his thumbs, getting whacked with things and he's often so tired he almost falls asleep driving. He got hit in the face with a chainsaw a while back, but luckily was wearing his gear and it just dented the face covering.

He works with some guys pushing 60, but seems like a job where there's a good chance you just won't physically be able to do it at some point, either through injury or just plain old age.

I was a cleaner at my school during sixth form and also did some evenings stacking shelves at Tesco.

That evolved into this:


the eleventh gig I can remember going to – uncarved.org blog

There was an industrial temping agency about 20 minutes walk from my house so I signed on there. You had to turn up at 6 o’clock in the morning and they would dish out jobs to people they liked the look of. Then the lucky ones would pile in a couple of vans and head off to some grim industrial estate to sell their labour. If you were unlucky you’d got up at the crack of dawn for no reason at all, but at least you could go back to bed and doss about for the rest of the day.

The work was basically the same wherever you went – moving heavy objects around, sweeping up or production line repetition. The only real variation was how much of a wanker the supervisor was. Bosses aside, the people were usually OK and took you under their wing. The ladies of the cheese factory were impressed by my polite manner and the guy who taught me how to clean out lathes at “Components and Linkages” said I should give him a call if I ever needed a steady job.

Some people are just shits though. I got sacked from a supermarket warehouse because I kept turning down overtime (“you’re no good to me if you don’t want to do seven ’til five”) and a couple of us got sacked from another warehouse by a jobsworth spotty middle manager because we’d swept the place clean twice over but hadn’t paid him due respect.

The maddest job was tarmac-ing people’s driveways. Four of us in a van – the boss was an old hand at charming housewives with the old “I’ve got a bit of spare tarmac missus, do you want your drive doing?” con. If he got a “yes” we’d get to work while he fucked off somewhere else for a cuppa or to drum up more business. I never mentioned to any of the good householders that their driveways didn’t need tarmacing because they were alreadyconcreted, or that we’d never done anything like it before and so the craftmanship might be a bit lacking… The police turned up a few times and we fobbed them off by acting dumb and saying that the boss had asked us to do x, y and z, so we were. Fortunately that only lasted a few days.

Usually the work was just dull and repetitive. I became increasingly reliant on the kindness and humour of others, or being able to enjoy my own company. The shittest job was rinsing valve casings in parafin. Put on rubber gloves, pick up two inch-square components, rinse in vat of parafin, put in a bucket. Repeat. For two weeks. Without anybody else nearby. I picked up my wages at the end of the week, reeking of parafin and social isolation. I had already organised and re-organised the list of records I was going to buy that weekend about a hundred times.

I’ve done 30 years in an office now though. Although the early years of that was also lugging boxes about and van driving.

I've handed in the notice on my teaching job, just thought I'd say.

DannyL said:
I've handed in the notice on my teaching job, just thought I'd say.
Click to expand...

DannyL said:
I've handed in the notice on my teaching job, just thought I'd say.
Click to expand...

why? and what are you gonna do now?
D

yyaldrin said:
why? and what are you gonna do now?
Click to expand...

Freelance life is daunting though but had to do it.
My place had degenerated something terrible being a big but not the only driver
D

I basically couldn't conceive of standing in front of a class in September and telling them in good faith that they were going to enjoy the course and I think they should apply themselves.

OK, but once you're better, what then? 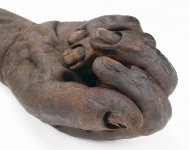