How do you plan to survive this Winter?

Seeing as none but the comfortably rich — maybe 2 dozen people in the entire land — will be able to afford heat their homes, cook their food, or remain connected to the internet this Winter, have you put aside anything to burn, eat, or wear?

Or is it a lot of fuss over fuck all?

Best thing to do is move in with older relatives, sharing heat and making sure they eat enough.

Lots of oldies in Wetherspoons for sure

Layers. Thermals. You get used to it after a while.

HMGovt said:
Seeing as none but the comfortably rich — maybe 2 dozen people in the entire land — will be able to afford heat their homes, cook their food, or remain connected to the internet this Winter, have you put aside anything to burn, eat, or wear?

Or is it a lot of fuss over fuck all?
Click to expand...

I'm getting a load of kiln dried ash wood delivered. I really hope it isn't just actual ash, they'd be within their rights.

So that's the living room sorted for heat. Inject everywhere else with foam?

We are a movement against the rise in energy bills

Join 128,000 others and cancel your energy direct debits on October 1st.

You can then offer to pay by other means. Which may take longer.

Apart from that it’s secondary glazing, extra laters and recourse to the pull up bar for me.

And the slow cooker.

Gonna carry on with my 8-9am walk too. Get the circulation going in these old bones. 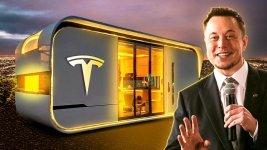 expected more from the savant
B

What is that, some sort of Tesla Smart Caravan? I think I mentioned before that I have a fri.. an acquaintance here who loves gadgets way beyond what is natural. He has these utterly useless smart lights in his flat. They gotta be one of the shittest innovations I've ever heard of; I assume that the idea behind them is that once you've programmed them they will somehow always be automatically on or off exactly when you want them to be. In itself not a bad idea I guess - I mean, who amongst us has never thought "my finger is soooo tired from having to push these stupid time-consuming and heavy buttons all the time"? And that is if you're someone like Denis or - I assume - all of us, who turns lights on and off using an ultralightweight portable remote control embedded in their wrist. I suppose none of us know - or even know of - anyone who still uses buttons on the wall that you actually have to physically walk all the way over to and then literally raise your hand to the correct height before you can push the switch, but believe it or not, only two or three hundred years ago that was the most common system. And some people still have that! For such people, still stuck in the dark ages with respect to lights, the energy and time that could be saved by switching to smart lights is enormous and does make sense, the only problem is that in the Smart Light system that Denis had installed there seems to be some kind of issue with the mind-reading technology and that means that, incredibly, sometimes the lights are on when he wants them off or off when he wants them on.

In fact I'd say that the lights are always in the wrong state and, as a result, any visit to Denis's flat is normally spent watching him arguing with the lights, his entire existence, at least when he's in the smart flat, is taken up by a constant argument as he tries to override the smart programming - he wants the main one on but apparently it would be smarter to have it off so that leads to a huge fight, when he gets it sorted the one in the corner flicks to the same state so he has to spend a few hours reprogramming that one until he's got it sorted - by which time it has probably got dark outside so now he wants it on after all. Eventually he will finally get it so that the lighting is quite pleasant - and everything should be fine as long as noone moves at all, say goes to the toilet or wants to fetch some more drugs from the kitchen or whatever, cos whenever you do that the smart light system starts trying to help you on your journey by turning lights on and off like some kind of poltergeist that had to study at a special school for slow ghosts. The whole thing is a completely embarrassing shit-show, gotta be one of the worst attempts I've ever heard at creating a labour-saving or convenience-adding device. Luckily I can't stand the prick and I make any excuse not to go to his house anyway.

He also has a smart-bottle opener which... I dunno, I assume it was the result of a bet to see if you could get very very unsmart people to buy absolutely anything if you put the s-word in its name.

some houses here have their roofs covered with solar panels, how much energy do those typically generate?

I dunno, a few houses have them in the town where I live and you see the dotted around on rooftops in the countryside and I think I've seen some fields full of them... a quick google reveals this one

And now it seems that they have a huge floating one. Obviously Portugal is more suitable than, for eg, my previous country for generating energy from the sun, I think if I had my own roof then I would certainly be interested into looking into putting some panels on it if it could reduce energy bills. Problem is, like most people here, I live in a block of flats. Maybe there is still a way - you would think that there ought to be right? - but, going by my experience of trying to get other people in the same block to work together for the greater good I think that it will be a total non-starter. What I've learned so far is that most condominium types - especially from the generation above mine - would happily go through any kind of hardship or unpleasantness if it will prevent anyone else gaining anything or improving their lives.

Actually more noticeable in our part of Portugal than the solar panels (though I don't know about relative energy generation) are the windmills. As soon as you leave Lisbon the hills around are covered in them, they are massive and dominate the landscape quite dramatically. Again it makes sense, the wind is very strong and you can feel it pushing you off course when driving down the motorways. The motorways they are surrounded by big hills and every hill has loads of windmills like in the pic - and this goes on for quite some time as you drive.

Wind turbines are so shit.