Yeah third (or fourth or whatever) recommendation for Blood Meridian.... I'd like to read it again actually - his last few ones have been increasingly spare in their style, would like to go back to one of the old overblown and violent ones and see if I still like it, pretty sure I will though. 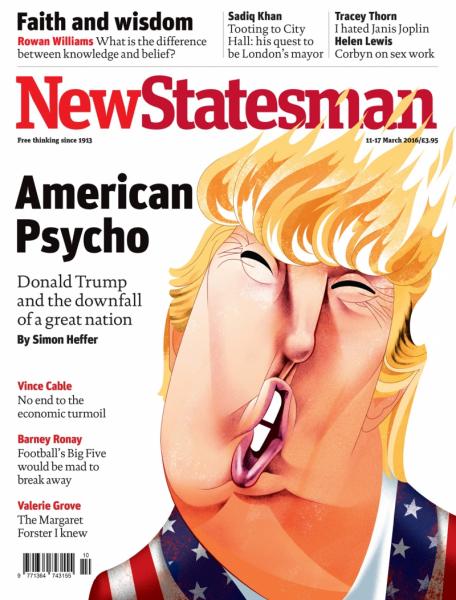 To be at the Democratic National Convention in Denver in August 2008 was a little like attending a religious revivalist meeting. Nearly eight years of George W Bush and his toxic friends – the Cheneys and Rumsfelds who dragged America’s international reputation below even where it had been in...

Corpsey said:
Did the premise of American Psycho seem fanciful, or purely satirical/allegorical, at the time it came out? I mean to say that a highly successful businessman would be slaughtering people (or fantasising about it) and getting away with it?

It seems to me that in the last 10 years especially the reality of rich, powerful men committing abusive acts towards powerless people and getting away with it thanks to their wealth and power has become not just speculative but a matter of common knowledge.
Click to expand...

I read an interview where someone mentioned this sort of thing about Ellis' books to him. That at the time some people could feel that "Oh, this is stupid. There's nobody this rich and stupid and narcissistic." but looking at the Kardashians etc in the years since, there absolutely is. And he just laughs and says "Surprise!".
P

Corpsey said:
Did the premise of American Psycho seem fanciful, or purely satirical/allegorical, at the time it came out?
Click to expand...

idk but assume it that the time it was taken as highly stylized, absurdly exaggerated

I don't think it's that knowledge of rich, powerful men committing abusive acts and getting away with it has become common knowledge, so much as culture has shifted in the last 30 years - an really, as you say, in the last 10 - to the point where it's no longer acceptable for rich, powerful men to commit abusive acts - that they will (sometimes, at least) not get away with it. Harvey Weinstein is another one "American Psycho" figure (tho he'd fit much better into Less Than Zero).

American Psycho is so specific to that cultural moment. maybe he hasn't written a good book since b/c his writing only works in the context of the greed for lack of better word is good 80s. Gordon Gekko is more or less a realistic Patrick Bateman.

as I said above, if such a book was written today it would have to be set in the world of private equity. and/or tech. today's Bateman be publicly woke, his company would have "don't be evil" type mission statement, he would be on some kind of raw/vegan/etc diet, he would have one of those doomsday bunkers ultrarich guys have in New Zealand or old nuclear missile silos or wherever.
P

there would be no point in writing that satire about Wall Street now. the default cultural assumption is that finance bros are utterly amoral/reprehensible.

I wonder how much of that is down to AP itself though. I mean, obviously not all but something quite neat in him writing such a brutal satire on wall st that it became the default setting and removed the need or even possibility of anyone doing it now.

He's said if he wrote Less than Zero today, it would be about ten pages as the majority of the book's people looking for each other and asking to use the phone. None of that's an issue now that everyone has a mobile and social media.

I'm currently reading Against Interpretation (Sontag), rereading Kingdom of Fear (HST) and enjoying both. I'd forgotten how loose Thompson could be... The thing's ostensibly a memoir but really it's whatever seems to have come to mind as he was writing it.
D

Can I just say I fucking hate that Larry Clarke film? It relishes and delights in degradation of teenagers, valourises their worst impulses. As someone who works with that age group, Teens are funny, weird, stupid, selfish, idiotic but overall much more interesting than an ageing pedos miseryporn vision. It's a deeply, deeply reactionary vision. It's just a fucking Daily Mail front page in hipster clothing.
E

How's the Sontag one? I remember reading the eponomous essay because Corpsey (I think?) posted it somewhere and I liked that thinking a lot.

Basically, as I understand it, she was trying to break with the Freudian traditions of interpretation, the 'hermeneutics of suspicion' as Ricoeur put it, towards a more lived experience.

@DannyL Which one? Isn't that basically everything he's ever done?

@entertainment Yeah, she's railing against interpreting a text and trying to shoehorn it into what you wish it was rather than engaging with it for what it is. She also talks about style as inseparable from content and the seperation of the two in a lot of criticism being a problem.
D

Kids specifically. I don't think I've seen anything else by him.

Kids is exploitative and awful, but I think its a mistake to view it as purely reactionary due to its implicit societal critique.
E

@version Yeah I remember reading it and maybe she was talking about how that sort of discourse would have the effect that artists would seek to accomodate the routine of interpretation in their work and that really resonated with me. I hate that sort of obligingly symbolic, sometimes allegorical, work that comes with an obvious, coherent subtext ripe for extrapolation while neglecting any sort of embodied artistic expression.

Best example I can think of is the movie Mother with Jennifer Lawrence.
P

droid said:
its a mistake to view it as purely reactionary due to its implicit societal critique.
Click to expand...

I'd agree. idk if there's even really a social critique. it's just "this is what kids are really up to".

the lack of judgment is what bothers a reactionary, whereas for me (and you guys, I think) it's the exploitative nature. and that it's just a bad, uninteresting film.
P

version said:
the majority of the book's people looking for each other and asking to use the phone
Click to expand...

this makes me think of the scene in Terminator when Sarah Connor pays $4.50 to get into the worst 80s club on earth in order to use their phone

another great 80s work of art that is mostly about people looking for each other and using the phone (i.e. the Terminator uses phonebook to find victims)
P

droid said:
Kids is exploitative and awful, but I think its a mistake to view it as purely reactionary due to its implicit societal critique.
Click to expand...

I guess - am open to convincing but tell me more about where you see social critique. Haven't seen it for a long time but I taught in a unit called "shocking cinema".

I reacted so strongly to it because one of my personal bugbears is the way that teenagers are so badly misrepresented, and the film really delights in this, while using Clark's reputation and a more arty style to seem deeper than it is.

The nihilistic hell the protagonists live in, products of an apathetic, alienating urban environment.

I thought Kids was cool when I was much younger, but I could never watch it now. I haven't seen any of his other stuff, but I've heard enough to have the impression it's basically the same thing over and over and he's a creep. Korine's a bit unsettling too.
You must log in or register to reply here.
Share:
Facebook Twitter Reddit Pinterest Tumblr WhatsApp Email Link
Top