“It’s one of those nice, gentle, French movies about incest”

I rather enjoyed Nurse 3d which was on telly tonight (in 2d obviously). Paz de la Huerta stars as the titular angel of mercy - but only by day, at night she hunts down her prey; cheating husbands whom she seduces and kills if they continue their pursuit of her after being given one chance ie being very clearly told to fuck off.

That's the premise anyhow. It feels as though she fairly quickly forgets any kind of discrimination in terms of whom she kills and she spends most of the film talking in a scary baby voice, slaughtering anything that moves and taking off her clothes. I swear, if someone put together a "Paz de la Huerta nude reel" it woukd be feature film length.

Anyway, if may be no Citizen Kane, but it IS a satisfyingly blood splattered load of cobblers that hit the spot pretty nicely for me and kickstarted what will no doubt be a week of horror films in the building up to Halloween. Ý

Yesterday a film came on telly just as I was about to crash, but it was good enough to suck me in and force me to stay up until 6am or whatever. The film is called Safer At Home and is the most direct response to lives during the pandemic I've seen yet. It's set ten minutes into the future when the nth and most deadly variant yet of the C19 virus has caused millions of deaths in the US, and increasingly strict curfew rules mean that the country is all but living under martial law (yes yes, even more so than now).

Anyway, that's the premise... the film starts with four hipster households "meeting" via Zoom or similar to celebrate the birthday of one of their number which ought, if circumstances were different, to be taking place in Vegas. As is they make do with each others' virtual company and a party pack one of them has mailed out, containing a main ingredient of super strong "molly".

From there it develops in the same way as any film in the genre I'm gonna catchily christen "oh no the stripper's dead but we can't call the police cos we've all taken drugs, so let's just hide the body and never speak of this again, I'm sure nothing else will go wrong".

Actually that genre has two sub-genres, sometimes it's deadly serious and sometimes it's more like The Hangover or that one with Scarlett Johansson where it's played for laughs. This one is very much in the former camp.

And that's the one problem in this film. The dialogue is great, the actors are all extremely believable as irritating twenty-somethings (a role that probably didn't necessitate a chameleon like change for any of them) and, as the drugs are too strong, arguments develop and so on it's all very well observed and convincingly portrayed. But it does then turn on one major event which didn't really make sense to me, especially their reaction to it. Which is a shame cos apart from that it's extremely effective - the party, the arguments and then the tense game of cat and mouse with curfew cops that ensues, the non-participating people cleverly caught in the action by the ongoing screen connections.

At first I thought that they had taken an already extant plot and put it on Zoom to pretend it was written now. But actually the Zoom thing is very effective in that they can all see what is going on but are horrifyingly unable to influence it. Also, when one of them is out after curfew and chased by police it's quite scary cos you see how badly it's all been ravaged and at the same time you grasp that the curfew is more serious and that the cops have extra powers... but you're not sure what.

Anyway, I enjoyed it quite a lot. A few minor tweaks and it could have been a real low-budget classic.
Last edited: Oct 28, 2021
M

I just watched Showgirls for the first time last night and loved it. Reminds me of Fire Walk With Me in a lot of ways.

Both psychosexual epics about abused but defiant women. Both characters struggling against the savage world around them but mainly against their own corrupted souls. Both have psychopathic violent fathers at the root of it. Both have the sensible best friend character who gets dragged into hell as punishment for their compassion.

Both use an extreme over the top style and similar colour palette with lots of bright crimson and gold. Nightclub scenes the highlight of each movie with visceral marriages of reverb and strobes. And both very American stories that provoked disgust and outrage, I think because of the truths they express.

I watched Todd Haynes' thing on DuPont and Teflon, Dark Waters, and thought it was great. One of those instances of a good director sneaking style into what could have been a bland, Hollywood thriller.

The story itself is absolutely maddening. They apparently knew the stuff was poisoning people, had plenty of their own reports and data on it and just carried on; some of the people implicated in the film still work at DuPont to this day.

It also makes you wonder how many other household products, items of clothing and so on are affecting our health without our knowledge; I read something the other day about some scientists having found microplastics in the placentas of unborn children.

Rewatched Miller's Crossing last night. This time around I noticed you barely see the city or anyone who isn't a gangster. Apart from the scenes in the woods and the bit outside Finney's mansion, the whole thing looks like it's shot on a set. The streets outside some of the clubs just don't look right and it's all so tight and claustrophobic.

This isn't a knock against it, just an observation. Sometimes it reminded me of the street sequences in Eyes Wide Shut, which were shot on a set. That instinctive sense that there's something unreal about it.

I don't know whether that's the case, but it felt that way to me. 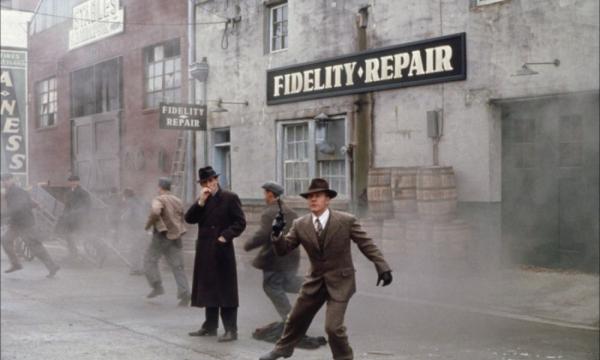