IdleRich said:
The point is, there is a guy who used to be catcher but can't any more cos he is injured. They want to retrain him to play first base and kick out the guy who is playing first base at the moment even though he is good. I'm asking why - if they are gonna retrain him from scratch anyway - they don't train him for a position which doesn't clash with one of their stars?
Click to expand...

that's a good question, rich. and one you should ask the fictional general manager in "Moneyball", because I don't know.

I guess it was basically some manufactured tension that was a flaw in the film rather than in my understanding of the game.
L

Stats have had a huge impact but I laugh sometimes reading the sports stories on FiveThirtyEight. They are extreme stat dudes and have all these acronyms for arcane percentages, everything has to be measured and ranked. meanwhile, games (and sometimes, championships) are often still decided by some weird fluke, which you can't predict with numbers.

In the film there is that bit where they get rid of that guy who is dancing around and being a dick after they lose... they realise that despite his stats on the field he IS a negative influence in the dressing room... so I suppose that is an acknowledgement that while the "getting on base" stat is the first thing to look at and it doesn't matter if they do it by hopping or crawling or whatever, the players are ultimately not just automatons and if the stats have been undervalued, they are not everything.

in the last couple of days i've watched another recommendation from @IdleRich called we summon the darkness which was rubbish but, like the other shit recommendation of his i watched about coronavirus, it featured a scene where the characters play a game called never have i ever.

just watched that Trading as recommended in the fighting films thread which was decent but i wondered if the violent trader psychos would break off for a game of never have i ever at some point.

now that i think of it i've played that game myself once.... in Lisbon. coincidence? or illuminati symobolism?

Lazy afternoon and kids out 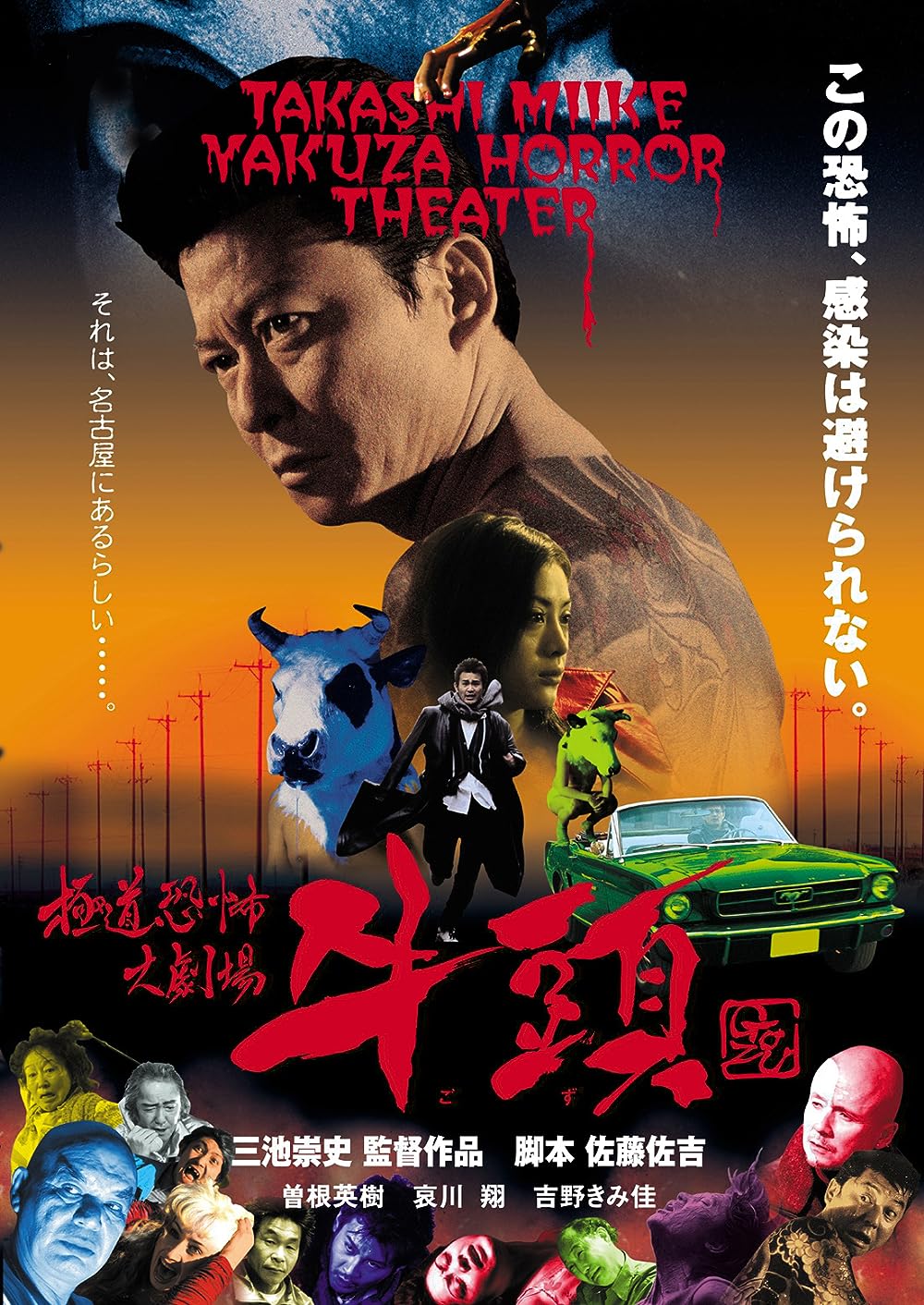 Gozu: Directed by Takashi Miike. With Yûta Sone, Kimika Yoshino, Shôhei Hino, Keiko Tomita. A yakuza enforcer is ordered to secretly drive his beloved colleague to be assassinated. But when the colleague unceremoniously disappears en route, the trip that follows is a twisted, surreal and...

could only remember snatches from seeing it previously, still a riot. Completely inside out headfuck visual realm tied with baritone storytelling. Grotesque and silly too, not lazy by any stretch. If you’re going to go radio rental you may as well go all in and Gozu defiantly achieves insanity

We went to see The French Dispatch but you gotta do a test to go in the cinema, we were late and flustered and we managed to spazz up both tests so that the results were invalid and we had to go home and be annoyed. Total waste of ten euros and two hours.

Watched it online when we got home anyway... it definitely doesn't belong in this thread that's for sure. Guess it's alright but to call it slight would be a huge understatement. Three stories... the first was definitely the best, the second was the problem though. Some kind of pastiche of the student riots of 68 (although transplanted to the hilariously named town of Ennui-sur-Blase - in fact the setting for the whole film) that just didn't really work for me, and it seemed really long and boring, plonked there heavily right in the middle of the thing, its weight uglifying everything for miles around... I believe (though I can't really be sure) the last part might have been better, but the issue was that by then I'd kinda lost interest and my concentration was broken to the extent that I couldn't get it back and give the final part its proper consideration.

Yeah I thought this one had a similar affliction to Isle of Dogs where all of the characters are quirky beyond tongue in cheek levels.

I really like Wes Anderson films (Fantastic Mr. Fox is one of my favorite animated, and I also like Tenenbaums, Life Aquatic and Budabest) but I do think they need more than just an amazing cast and a pretty palette.

I thought Benecio del Toro's character was maybe the most interesting, and I'm disappointed we didn't get more than couple brief scenes with Christoph Waltz.

Of the lost children

Got pissed the other night and watched 'Man on Fire' followed by 'Lessons of Darkness'. An evening of synchronicity as I chose both on a whim and they seemed to dovetail nicely, plus I finished DeLillo's 'Running Dog' which ended up entering the same delirious, sandblasted desert territory as the other two.

Herzog can irritate me, but 'Lessons of Darkness' is probably the best I've seen of his. I was apprehensive about a film consisting of shots of burning oil wells and not much else, but it flew by and I immediately went back and rewatched bits and pieces of it.

Beautiful, beautiful clip. Thanks for posting it/drawing to our attention

The full film's on YouTube, but in worse quality.