marine rescue diver bloke said:
at 8.30am today we got a phone call from someone on a train who thought they had just hallucinated and seen a whale going up the Thames near Waterloo Bridge.
Click to expand...

i just popped up to vauxhall in me lunchbreak to see if i could spot it
apparently it's already up to putney by now! 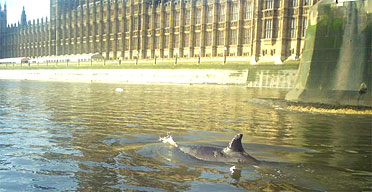 it looks pretty happy on the telly

looks like Will Self is ripping off Martin today. Compare:

"am I the only person who thinks it might, just might, be considered a portent of catastrophe 'n' doom to have a whale kick the bucket in your capital city? Imagine, for a second, that our most venerated city columnists actually did something useful and documented London life ((instead of trying to score sex through schadenfreude)), and bequeathed a wond'rous stack of archives to future generations. '21/01/06. A WHALE EXPIRED ON THE APPROACH TO SHADWELL. AND IN EAST LONDON, A COAT WAS ARRESTED.' See, it's not difficult. Ain't exactly Thomas Pynchon, you dig?"

"Call me Ishmael, but I realised at once that it was all up for the poor cetacean. When a prodigy of nature like this occurs in an ancient city such as ours, it can only be interpreted as an omen...Obviously the mini-Moby's miserable, shocked, breathless demise was a preview of our own."
M

The monosyllabically-surnamed cunt! If I ever find him I'll make him wish he'd bloody overdosed*

Read more about the whale in my forthcoming book, "How The Dead Live"

* if that isn't too bullying

someone told me that there was a large sperm whale that made it as far as london bridge in the eighteenth century... i asked whether it had made it back safely to the open sea & they replied 'nah... got harpooned...'
You must log in or register to reply here.
Share:
Facebook Twitter Reddit Pinterest Tumblr WhatsApp Email Share Link
Top