lets talk about how westerns are the best films going,better than gangster films even

My dad is a western kind of man. He only ever seemed to read books by J T Edson and Louis L'Amour. He loves western movies and has passed on that to me. I remember it being one of the few times we would both sit down together. He was always a straight down the line Wayne/Randolph Scott kind of guy. If asked to discuss his favourite film he'd probably plump for The Searchers or Red River. In fact his only real ambition is to go to Monument Valley when he retires.

When i suggested some of the seventies 'new hollywood' westerns to him in my callow youth he turned his nose up - Redford should never be in a saddle (Tell Them Willy Boy Is Here) according to him. He just about managed to maintain a dignity when i mentioned McCabe and Mrs Miller. But i suppose for me it's things like The Missouri Breaks, The Great Northfield Raid, stuff like that that i partciularly enjoy.

We both managed to agree on McMurty's Lonesome Dove but for probably very different reasons...and of course The Unforgiven. He even reckons Costner is an actor much better suited to the western than anything else.

I still get a pang of excitement when i see that The Big Country is on on a saturday afternoon on BBC2 (or Giant, which is a kind of western) or High Noon or 3.10 to Yuma.

Django is an absolute classic - beware of the endless remakes, most of them were dross.

Fistful of Dynamite was OK.

Sorry, that's all I can think of.

Staff member
the wild bunch is great cos theres lots of killing in it. high noon is amazing, its about being a man. very important. once upon a time in the west is bettter than anything in the world. thats a proper film. the searchers is incredible, she wore a yellow ribbon, the spaggetti westerns with eastwood are all fun but not on the level of the ones i just mentioned, great though, plus morricone music, good the bad and the ugly etc. if you don't love those your mentally wrong in the head. josey wales, thats fun, how can you not like that.

Staff member
stagecoach,some of the best characters in the history of cinema
the man who shot liberty valance, mmmmm thats good
red river yeah that too
the billy the kid one with dylan, that one too

those are real films
C

i can never tell if luka is joking or not... but here goes anyway:

and then how about some Marlon Brando westerns:

One Eyed Jacks is from 1961 and is directed by Brando- well worth watching if you like spaghetti westerns or peckinpah
The Missouri Breaks has some of Brando's most over-the-top acting ever...

i could go on... i have a soft spot for 70s (non-spaghetti) 'stoner' westerns- the best example of which might be "Pat Garrett and Billy The Kid", which luka mentions above

Staff member
i'm certainly not joking. i really do love westerns. and i'm pleased to see a whole list there which is completely unfamiliar. i'll try and see some of those.

I'm with Luka. Films you can watch. Most of the filns that ppl like on Dissensus I can't sit still for. No offence, like.

some faves not mentioned yet...

the gunfighter
the man from laramie
johnny guitar

+ the budd boetticher ones, The Tall T, Seven men From Now, Commanche Station etc... short and simple, beautifully formed westerns. quite hard to see some of them these days tho i think, sadly.

unforgiven, the more recent eastwood one, might end up being the last really good western ever made maybe?

lots of good spaghettis besides the leone ones too..

Django mentioned before is great, some of the 'sequels' are alright too.

For What it's worth:

Sam Peckinpah's work - Pat Garret and Billy the Kid, The Wild Bunch (and his urban-cowboy westerns, Straw Dogs and Bring Me the Head of Alfredo Garcia). [Of course, most of the later Vietnam movies are Western re-makes]

I'd better not venture into D.W. Griffith territory ...

what makes a western a "western"?...is it the hats?...the tumbleweeds?...the narrative?...'cos, John Carpenter's Assault On Precinct 13 is a western in all but setting, essentially a remake of Rio Bravo...and movies like The Wild Bunch and The Unforgiven are great precisely because they critique the western narrative...
C

yes i think henry s is right, there's a good quote from Warshow, westerns are "an art form for connoisseurs, where the spectator derives his pleasure from the appreciation of minor variations within the working out of a pre-established order"

these little variations and re-arrangements allowing interesting re-evaluations of the central themes, codes, morality etc of the western...
P

Henry S: and movies like The Wild Bunch and The Unforgiven are great precisely because they critique the western narrative...

Eastwood's Unforgiven ostensibly critiques it only to viscerally, sadistically reinforce it in its violently revenge-deadlocked denouement.

Mister Matthew: yes i think henry s is right, there's a good quote from Warshow, westerns are "an art form for connoisseurs, where the spectator derives his pleasure from the appreciation of minor variations within the working out of a pre-established order"

Yes, but its the exceptions to such lazy genre re-affirmations that ultimately prove the most interesting, connoisseurs 'an all ...

As to the Hat as master-narrative signifier:

But as cowboys and their headcovers go, this one, The Cowboy, is the most ominous: 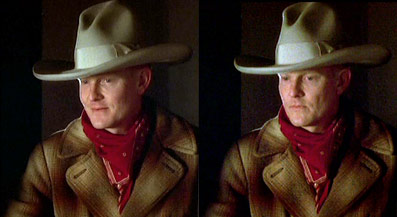 Samuel Fuller's 40 Guns (recently out on DVD, at least in the US), gorgeous widescreen black and white with Barbara Stanwyck as the phallic woman ("She's a high-riding woman with a whip...")

Padraig said:
I'd better not venture into D.W. Griffith territory ...
Click to expand...

I don't see why you would, when birth of a nation isn't a western but a "historical" drama. (And a deeply flawed and incredibly racist film). Griffith might be worth his own thread, if this weren't the only feature of his i've seen.

Anyway, my girlfriend always takes me to see art films from central&eastern europe, so a couple of weeks ago I took her to see a matinee of Ride the High Country. It's a Sam Peckinpah film, one of his first that was critically well recieved.

I love the way westerns come from a time when studios made so many films there was space for simple cheap b-movies. In that environment you can produce interesting ideas without much fanfare or expectation... diamonds in the rough so to speak

Ride the High Country is full of the things that make American film great. A simple moral tale with good guys and bad guys. The highest thing you can be in this world is a tough guy with honour. The film is about a changing safer west, the men who had made it that way, and the end of their era.

I find it interesting that when westerns grew up, they started dealing with more complex storys about change in the west, and ultimately the riddance of lawlessness. It's as if they were also documenting their own demise as popular film style. (Or at least the setting for the genre- the standard story formats of westerns do still arise regularly).
J

Someone else mentioned it above, but I thought Bullet For The General was really good. I've only seen a few episodes, but I really like the Deadwood program too.
P

I don't see why you would, when birth of a nation isn't a western but a "historical" drama. (And a deeply flawed and incredibly racist film). Griffith might be worth his own thread, if this weren't the only feature of his i've seen.
Click to expand...

Most all Westerns are "historical" dramas, Johanek; you're confusing genre with period, and "flawed" and "racist" are invariably inherent characteristics of the Western genre, including many of those neo-Westerns that "try/tried" to deconstruct it (including films by Leone, Peckinpak, Penn, Altman, Roy Hill, Mann). Griffith established the narrative framework, and Birth of a Nation is a Western [much as Star Wars is, despite its SF trappings].
T

Having watched those Eastwood western's quite a few times, I gotta go with "For a Few Dollars More," definitely a forgotten gem in comparison to "the good, the bad and the ugly." potentially even better a morricone soundtrack than "the good..." too!