So, looks as though it's been close as could be but with a little bit of luck Berlusconi is finally going to be out on his ear and I for one couldn't be more pleased. Still, I'm not counting my chickens until he's actually admitted defeat.
N

Mr Berlusconi has pinned much of the blame for Italy's crime problem on immigrants and has vowed to "wash the piazzas clean of uncertainty". Immigrants who claim to have family in Italy will be given DNA tests.
Last edited: Jun 27, 2008

Damn - those two previous posts show much can change in two years. The problem was the weakness of the government that replaced him I guess, seems that the bulk of Italians prefer a powerful wanker to a weaker, more reasonable leader.
N

Yes, the Italian fondness for machismo is what he taps into.

I meant weakness in terms of a small majority (made up of not especially close factions) but it could well be analogous.
N

Ha, funny I should assume that. But from what I understand of a certain type of Italian mentality that's how I see the politics there working.
Z

noel emits said:
Yes, the Italian fondness for machismo is what he taps into.
Click to expand...

i read this thread as "italian erection"...

I guess that this is not really relevant to the election, but there it is. Pretty revolting. 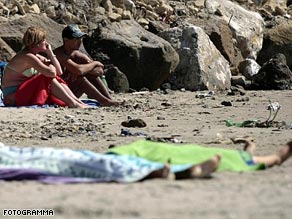 Italian news agency ANSA reported that the incident had occurred on Saturday at the beach of Torregaveta, west of Naples, southern Italy, where the two girls, aged 14 and 16, had earlier been swimming in the sea with two other Gypsy girls. Reports said they had gone to the beach to beg and sell trinkets.

Local news reports said the four girls found themselves in trouble amid fierce waves and strong currents. Emergency services responded 10 minutes after a distress call was made from the beach and two lifeguards attended the girls upon hearing their screams.

Two of them were pulled to safety but rescuers failed to reach the other two in time to save them. Their bodies were eventually laid out on the sand under beach towels to await collection by police.

Photographs show sunbathers in bikinis and swimming trunks sitting close to where the girls' feet can be seen poking out from under the towels concealing their bodies. A photographer who took photos at the scene told CNN the mood among sunbathers had been one of indifference.

Other photos show police officers lifting the bodies into coffins and carrying them away past bathers reclined on sun loungers.

"While the lifeless bodies of the girls were still on the sand, there were those who carried on sunbathing or having lunch just a few meters away," Italian newspaper La Repubblica reported.​

Did these people necessarily know that the girls were dead? If I saw someone laying under a towel at the beach, that wouldn't be my first thought. Also, how would they have known if these girls were gypsies or not?

Good point -- if I saw two bodies carried out of the sea by rescue teams, then drapped with towels and lying totally still on the beach, I'd probably just assume they were really tired swimmers.

swears said:
Did these people necessarily know that the girls were dead?
Click to expand...

Well they might have seen them being dragged out of the water. And young kids on the beach (they were 11 and 12 according to the story in today's Metro) are more likely to be running around having fun than, er, sunbathing with their whole bodies covered in towels, I'd have thought.
Last edited: Jul 21, 2008
N

Corriere recalled that this was not the first time people had decided a death was no reason to give up their day at the beach. In August 1997, sunbathers carried on as normal after a man drowned near Trieste.

But the fact that the two victims on this occasion were Roma added an extra twist to the affair.

Italy is gripped by anti-Gypsy feeling. Since coming to office in May, Silvio Berlusconi's rightwing government has appointed three special commissioners to deal with the Roma in each of Italy's three biggest cities - Naples, Milan and Rome. It has also ordered the fingerprinting of the country's Gypsy population, including minors, who make up more than half of the estimated 150,000 Roma in Italy.

The European commission has asked the Italian government for more details on the census, and this month the European parliament approved a motion condemning it as an act of discrimination banned by the European convention of human rights. Berlusconi last week told the commission president, José Manuel Barroso, that the information was being collected to ensure Gypsy children went to school.

The civil liberties group EveryOne said it was unconvinced by reports of the incident at Torregaveta and asked whether there might be something more sinister behind it.

A statement from the group said: "Two young Roma would never have left their scant merchandise for 'a refreshing dip' in the waves. Two Gypsy girls would never have gone bathing in full view of everyone because of the modesty that is one of their distinguishing characteristics."

vimothy said:
Good point -- if I saw two bodies carried out of the sea by rescue teams, then drapped with towels and lying totally still on the beach, I'd probably just assume they were really tired swimmers.
Click to expand...

Well, that's assuming that the people had arrived before that had happened. I think the fault lies with the authorities for not clearing the beach. I'd assume that some sort of announcement would be made.

Maybe I am just giving people too much benefit of the doubt here.

Maybe, maybe not. But I think it looks pretty obvious from the picture that the two bodies under towels are corpses.
N

I'm not convinced that you wouldn't find some people on many busy beaches who would just carry on regardless in those circumstances. Complacency and disconnected selfishness. Not that it's right, I just don't find it all that hard to picture. Obviously there are other dimensions to this though given the present climate in Italy, which it should be noted is one that the Government is provoking and manipulating.
C

There was some proper Berlusconi-ribbing on HIGNFY last night. What a fucking sleazy old perv - not to mention being too busy chatting on his phone to greet Angela Merkel at an official EU summit. Christ.
C

Mr. Tea said:
There was some proper Berlusconi-ribbing on HIGNFY last night. What a fucking sleazy old perv - not to mention being too busy chatting on his phone to greet Angela Merkel at an official EU summit. Christ.
Click to expand...

every time i see that film i wind up screaming at merkel "walk away, just leave him, e's not werf it"

crackerjack said:
every time i see that film i wind up screaming at merkel "walk away, just leave him, e's not werf it"
Click to expand...

So, Berlusconi lost his immunity then (I'm a bit late with this I know). Does that mean there is any realistic chance of him going to gaol or whatever? How does it affect Mills? What about the ginormous fine to his family company, are they gonna make that stick or will he wriggle out of that? I guess it's just more and more legal process without anything ever actually happening in the end. I'm just interested in how he argued that it was constitutional for him to have immunity from prosecution even though the constitution specifically says that no-one (except the speaker or something) should have such an immunity.
You must log in or register to reply here.
Share:
Facebook Twitter Reddit Pinterest Tumblr WhatsApp Email Share Link
Top