Female artists doing it for you right now...

skim said:
The fine Warrior Queen always puts a smile on my face...

Warrior Queen undoubtedly. Watch out for her vocal version of Skream's 'Mi Love It' Too much!

And Warrior Queen is wonderful.

boomnoise said:
Warrior Queen undoubtedly. Watch out for her vocal version of Skream's 'Mi Love It' Too much!

hello dissensus. boonmnoise otm re: warrior queen and skream - simply the best moment of last dmz for me - but tbh not feeling scorpio too much. definite potential, but a bit ltd in terms of spontaneity, inflection and lyrics. potential tho - kind of a female poax if she got a bit witty with it...

this french woman's got a great voice and really nice songs. heard her on late junction on radio 3.

Speaking of agf, whose music I adore, has anyone heard her recent record with Kateryna Zavoloka? I haven't. Was curious.
Z

"oh I'm going to do these cute little non-linear monologues which brush upon important "issues" in english with my european accent, and then I'm going to cut it all up and add some abstract digital beeps and burps to it and you will listent to it and feel very smart and sophisticated and think it's the most brilliant thing since Laurie Anderson."

where as this lady

where as this lady is pure fire. even though there are only a handful of drop dead gorgeous pieces I've heard by her, the incredibly challenging avant-noise she does is very, very impressive. she also uses her voice, but in very interesting and innovative ways (not breathy, cliche and coy like AGF). 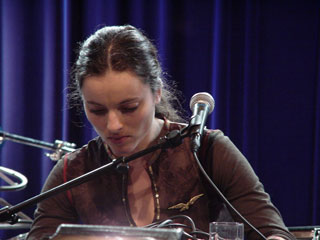 jessica rylan doing acapela in front of bemused noise boys at no fun fest was awesome.......
and wynne's voice is really excellent. .... especially with the half joking warble ... but what happened only writing songs about "Havaline"?

i'm enjoying "magnetic attraction" by y-pants and "who is it?" by deadly lampshades ,

Sorry if this is just me being grumpy but I was in Ljubljana at the weekend and i was introduced to 2 DJs as "the best female DJs in Slovenia" and I really felt insulted on their behalf, like are they among the best DJs, or just the best female DJs? When I see these tours of female artists or female DJs I always think "don't you want to stand or fall on whether you are any good, instead of just your sex?"

But I'm a male so perhaps I don't know what I'm on about.
Any thoughts?
Sorry for sidetracking this thread.

boomnoise said:
Warrior Queen undoubtedly. Watch out for her vocal version of Skream's 'Mi Love It' Too much!
Click to expand...

Will look out for that – cheers
V

Liking Tujiko Norikos lp 'From Tokyo to Nayagara' (or something like that) a lot at the moment. Very nice and chilled, to draw a lazy comparison it's vaguely Bjork-ish.
Z

Edward said:
"don't you want to stand or fall on whether you are any good, instead of just your sex?"
Click to expand...

this one is most certainly doing it for me:

(edit: what used to be here was a picture of a hot female dj. but removed because apparently it offends people's refined, asexual sensibilities.)

and I bet the one she just took off was Burial and the one playing now is Razor-X productions.
Last edited: May 31, 2006
T

confucius said:
this one is most certainly doing it for me:
Click to expand...

^^^ herewith a humble request to remove the yo-dude-witness-my-teenage-sense-of-humor dreck photo.

No, on second thought, leave it, because it speaks volumes about anyone who would post it on this forum: tacky, and an eye-sore.
Z

and what, may I ask, is wrong with a little "teenage humor" once in a while? can we not be sophisticated AND retarded at the same time? can we not appreciate Barthes AND Beavis and Butthead?

if I'm acting like I'm 15 (admittedly), you're being a granpa about it.

what's more, the stupid picture was in tune with the conversation - someone was talking about the sex appeal vs. talent issue upthread... but whatever.
Last edited: May 31, 2006
Z

on the serious tip - this is one of my favorite Cellists of all time: 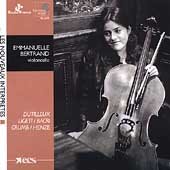 and you can read a description and download her amazing out of print album on Harmonia Mundi on my blog here:

Edward said:
Sorry if this is just me being grumpy but I was in Ljubljana at the weekend and i was introduced to 2 DJs as "the best female DJs in Slovenia" and I really felt insulted on their behalf, like are they among the best DJs, or just the best female DJs?
Click to expand...

I have gotten that (best female dj in some small subcategory) - and it is insultin and stupid. usually that means the best of four or five people! greaaat. thanks a ton.


Edward said:
When I see these tours of female artists or female DJs I always think "don't you want to stand or fall on whether you are any good, instead of just your sex?"
Click to expand...

yeah, well, there are a few issues here. I don't like 'ladies' night' so much for this reason, usually the male promoters run a weekly and wait until ladies night to book me (pointless and insulting), and then the male promoters/residents still play, only in drag (not original or funny. I'm like, man, even when you throw us ladies a bone, so to speak, you still can't stay off the decks..).

however, turning down paying gigs can be tough, and sometimes there are people I do want to work with. For me it depends on many factors. But women end up scrutinizing their motives (and get scrutinized for their motives) a lot more than men do in these kind of situations.

but that's another tangent. generally, as long as the advertising isn't demeaning, I'm inclined to think if you get in the door, good on ya, now you still have to rock the party.

sorry for the sidetrack. but you did ask!

also like Jah Coozi and Sasha's voice, forgot if I mentioned that before
E

Yeah exactly, nonthreatening to who??
The thing that made me write my post was the thought of what would happen if I started a thread called "Black artists doing it for you right now" or "White artists....."

but on another level i totally respect that nobody wants to chat on here about sex discrimination and they just want to chat about music.
F

Josephine Foster, "Hazel Eyes" and "A Wolf on Sheep Clothes", really feeling.
25 years from now people will search for those like we searched now for Vasthi or for Perhaps.

Celina/Selina, a mexinan singer who get killed, probably by her manager to increases sales (so is the vox populi... probably Notorious Pig and Tupac got killed in the same way...). Not that in mexico you buy original cd, you buy cd-rom from the street merchant.
You must log in or register to reply here.
Share:
Facebook Twitter Reddit Pinterest Tumblr WhatsApp Email Share Link
Top