Well, this is supposed to be Art as well as Lit and Film but Art is never discussed.

I tend to go check out the London based art stuff cos that is near where i live.

This week i went to the Constable and Hodgkin at Tate Briain and then the drawing room at the British Museum (my favourite rooms - always great stuff there - Rembrandt drawings/etchings, early french drawings and Avigdor Arikha drawings).

the Constables were a real revelation. In particular, the sketches showing a genuine link between what appears to be choc box landscapes and the roots of impressionism. The sketches are often as exciting (if not more so) then the finished pieces. Maybe I am being parochial but the 4 versions of Hadleigh Castle are worth the admission alone.

the Hodgkin was more difficult to judge - it seems to me that when he gets it right he is exceptionally moving but when it goes wrong he is no better than a sixth former experimenting wth abstraction - really evident in the last room.

want to see the kandinsky but thinking maybe it will disappoint, feel the same about the Mogdig at the RA

Nothing much has been as good as the re-organising of the Rembrandts in the National, though. Good gracious, he was good!!!!

Only a decade late.

I was never much into visual art (well, only photography) until recently, but I've had a bit of a revelation in recent months. Seeing the van Goghs at the National Gallery and this at the Tate:

I felt like I appreciated their there-ness as works of art for the first time. Rather than going to an art gallery as a kind of middle class penance, not really 'getting' it and feeling worthy but bemused. Which I had done periodically for years, without getting an awful lot out of it.

It helped that the Tate Britain collection from the 19th/early 20th centuries is stellar. Perhaps also that I began to draw again last year, after many years of not having done so.

Dunno much about Constable or Hodgkin I'm afraid, but the Rembrandts at the National are indeed great.

Liking Samuel Turner's work a lot, too (somehow contrived to miss his works at the Tate though): Expecting a third contributor to this thread in 2028, then.

The National Gallery might be my favourite place in London. Also Tate Britain, Victoria and Albert Museum. The British Museum for ancient art.

Baboon if you like Van Gogh I recommend going to the Courtald Gallery in Somerset House near the Strand. Lots of great impressionist stuff in there along with all the Rubens, Gainsborough, Van Dyck, etc.

This Van Gogh painting 'Peach Trees in Blossom' struck me as particularly miraculous when I went there a month or so ago. And you can't understand it properly without actually seeing it, because the paint is so thickly daubed on. It has real texture to it. 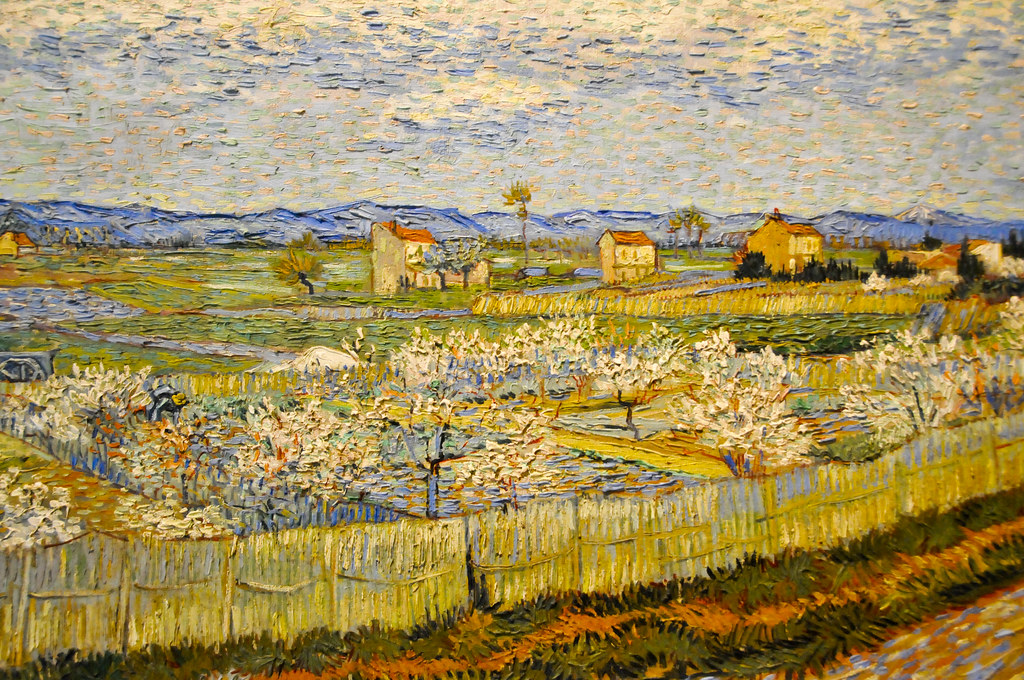 I would recommend 'The Story of Art' by Ernst Gombrich to anybody wanting to get into painting and art. It's the perfect entry point IMO cos it teaches you to see the beauty and ingenuity in art, it teaches you to LOOK, while guiding you through the historical developments through the centuries.

A few random ones: Nice post - 16th and 17th century usually not my era of choice, but I like that Titian.

The Cortauld Gallery is actually next on my list, next time I have a spare afternoon in London. With the van Goghs, as you say - the texture! The one I liked at the National was a simple landscape at Auvers, but it was mesmeric. And on the subject of van Gogh's own history, I really recommend watching Lust for Life with Kirk Douglas.

Will check The Story of Art for sure, thanks. I just started watching The Way of Seeing on youtube, so will get hold of the book of that, too.

I was going to start a painting thread but I see there already is one, albeit sadly neglected!

I'm another who was basically indifferent to visual art until a year or so ago. Like, I appreciated certain things intellectually (i.e. Las Meninas, still my favorite painting ever) but nothing really touched me. So, I was at the Art Institute, very blazed, in the abstract expressionist part of the modern wing, and I wound up staring at Untitled (Purple, White and Red) by Rothko for like half an hour. There was this description about his metaphysical goals and how he wanted to communicate the most essential, raw forms of human emotion thru painting. Idk, it's the kind of thing that can sound deeply profound or totally ridiculous, for whatever reason, some kind of switch turned on inside me, even after I was no longer there in the moment. Specifically painting.

One thing that's nice is that unlike music, my knowledge is pretty spotty, and I'd rather keep it that way so I can stumble on things and view them without too many preconceived art criticism/history notions. I'm going to try to periodically share things I like and maybe other people will do the same.

Vasily Vereshchagin was the foremost Russian war artist of the 19th century, tho in the antiwar sense of depicting the horrors of war as a protest against it

This is called The Apotheosis of War. Dedicated to "all conquerors past, present, and to come". Was denied showing in St. Petersburg on grounds of negatively depicting the Russian military.

Suppression of the Indian Revolt by the English. Supposedly bought by the British crown and destroyed, in an ironic twist of "suppression".

The Fate of the Animals by Franz Marc (most famous for all the Blue Horse paintings, which are also dope) aka "and all being is flaming suffering". Alternative title suggested by Klee "The trees show their rings, the animals their veins".

A man reaching down into the cthonic, antidiluvian void and conjuring forth the mass horrors and disintegration of the 20th century.

Marc himself was killed in WWI.

Glad I'm not the only one who used to stare at paintings with the epic indifference of a cat being exposed to music. And yes, Las Meninas is great. Interesting about the Rothko...I've still not really responded to the 'classic' modern artists all that much.

The Pre-Raphaelites and those they influenced are probably my favourites. For those in the UK, the main Birmingham gallery has a great collection - anywhere with a room devoted to Burne-Jones is alright by me.

Corpsey, my favourite at the Courthauld (apart from the van Goghs, but those are so well known that they feel like dream images) was this Seurat. It doesn't look all that on the computer screen, but in person when you can see the pointillism in its minute detail...wow:

Sickert also generally brilliant, and as a bonus probably definitely never was Jack the Ripper:

i was lucky cos i used to get stoned round a mates house who is very visually literate and had pictures pinned up everywhere and of course being 15 and very stoned the pictures start to come to life. seeing is like reading or listening. people assume they can do it but they cant. and they assume theyre doing it but theyre not. spending time with people who are really good at it helps.

yeah that's cool, I like a lot of things that lead into modernism, where the form is still there but starting to distort

Impressionism, definitely, some of the English Romantics like JMW Turner with those shoegaze maritime paintings

as far as the modernists, one has to imagine the immensity, this breaking free into complete abstraction

Luigo Russolo and his intonarumori, "This limited circle of pure sounds must be broken, and the infinite variety of 'noise-sound' conquered"

Kazimir Malevich doing Black Square, and blowing it away with White On White

there's a mad glint to the whole thing, this fanaticism of rationality, efficiency, machines, zang tumb tumb, not just art but a moral imperative

of course WWI put a lot of that in a hideous light, and many (not all) of the modernists abandoned it after the war

anyway it's the same power that's in Stockhausen and the original musique concrete, if that makes sense

I update this more or less whenever I'm high 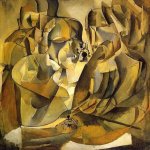 I'm into reading about art but I also like it when you know nothing about a painting and its mysterious - and you are able to see the visual power of it more purely, and the meaning of it can reveal itself through the paint rather than the caption

well it's different ways of engaging innit. there's the sensory experience and the pure pleasures of the eye and then there's the kind of impedimenta of context that padraig is appealing too. can switch between the two just as you do when reading.

when i found out what it was of it made it a bit less magical, but obviously the intention of the artist (Corot) was to depict a biblical scene

obviously the intention of the artist (Corot) was to depict a biblical scene
Click to expand...