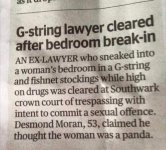 could go in numerous threads but this one seems apt:

Boris Johnson is not unwell and has not lost his grip, says No 10

Leo said:
could go in numerous threads but this one seems apt:

Boris Johnson is not unwell and has not lost his grip, says No 10
Click to expand...

Reminds me of his apparently apropos-of-nothing statement that "Britain is not a corrupt country" at COP26, which has been compared to Tubbs's attempted self-exculpation in The League of Gentlemen. 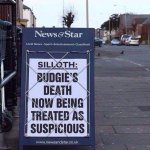 TORONTO -- An Ontario grandmother who bought an educational toy for her 15-month-old granddaughter was shocked when the dancing cactus started swearing and singing about doing cocaine.

"This toy uses swear words and talking about cocaine use," Ania Tanner told CTV News Toronto. "This is not what I ordered for my granddaughter."

The cactus was sold on Walmart’s website as an educational toy for about $26 and sings songs in English, Spanish and Polish.

But Tanner, who is Polish, said when she listened to the Polish lyrics, the cactus was singing about doing cocaine, drug abuse, suicide, depression and used profanities.

"It just so happens that I am Polish and when I started to listen to the songs and I heard the words," she said. "I was in shock. I thought what is this some kind of joke?"

The song is by Polish Rapper Cypis, who is reportedly unaware his song was used by the Chinese manufacturer of the children's toy.
Click to expand...

"It's about taking five grams of cocaine and being alone … It's a very depressing song," Tanner said
Click to expand...

That's some people's idea of a perfect night in, isn't it?

seems like the Chinese manufacturers just lifted the song from this "Polish Dancing Cow" video...

"I want heroin and other goodies"

I'm not one to kink-shame, but What. The. Fuck.

The patient is expected to make a full recovery

I see he is using the old "slipped and fell" excuse...

william_kent said:
I see he is using the old "slipped and fell" excuse...
Click to expand...

I'd have infinite respect for someone in this situation who said "Well what can I say? I love sticking large, bizarre and incredibly dangerous objects up my arse, and on this occasion I bit off more than I could chew. So fucking sue me, you vanilla arse-wimps."

You know what, I find this quite reassuring in a way cos when you have Donald Trump, say, on a phone being recorded obstructing justice or trying to cheat in the election or whatever and you think "How the fuck does he get away with this, it's one rule for the rich and one for the poor!" - but then when you realise that you can get high as a fuck, wear only a g-string and bust into someone's bedroom... and then be cleared of any kind of sexual trespassing, you realise that basically there are simply no rules at all for anyone... now I'm not sure that this is a good thing as such but at least there is some consistency.

And if it comes down to it, Trump can always claim he thought American democracy was a panda.

could go in any number of threads

Netanyahu responds to Trump's "F**k him," defends congrats to Biden

Leo said:
could go in any number of threads

Netanyahu responds to Trump's "F**k him," defends congrats to Biden
Click to expand...

Is Trump perhaps the pettiest and most easily-offended human being of all?

The world's most thin-skinned narcissist, I believe it is.
V 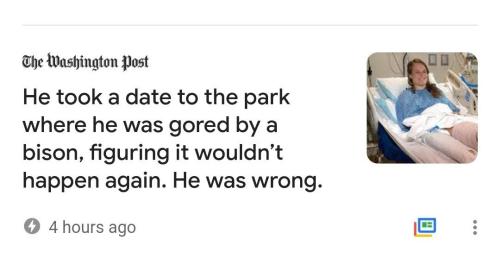 Was it the same bison?

Clinamenic said:
Was it the same bison?
Click to expand...