films you've seen recently and would NOT recommend

Little women, the new one, really boring, stopped watching after 1 hour. Completely unbelievable characters who are annoying in their earnestness

The Shape of Water was on here yesterday, so we watched it. It's a film I've heard mixed opinions of so thought I'd give it a go. Have to admit though that, now I come to think of it, I've pretty much never liked anything Del Toro has done which didn't bode well. I don't know why, he has interesting enough ideas and decent aesthetics but somehow... actually that's it, the ideas look interesting enough, they just never are. And it's the same with this one, there's a weird creature in a tank and she bonds with it better than the evil scientists and politicians (ok soldiers in this case) who want to exploit it, so she takes it home and puts it in the bath and then there is a race against time to get it back into safety before the baddies can catch it. Basically exactly what happens in Splash or Free Willy (probably, I've never watched it all the way through), or that South Park episode where they steal the whale cos the guards have tricked them into believing it's actually from another planet - at least in South Park it has a different ending in that they bribe the Mexican space programme to take the whale to the moon (where it instantly dies horribly). But really there was very little extra here, some nice enough art deco sets and so on and performances that are never shit as such but don't really go above solid, how could they really? And why should they for that matter? The story is so insipid and unoriginal. Even the ending when her mysterious scars come into play was obvious from the very second when they said that she had mysterious scars.

Shape of Water was a bit of a dud IMO. The one film of his I love is Pan's Labyrinth - but I do LOVE it.

Devil's Backbone is good too but it isn't scary (to me) which is a big flaw in a ghost story.

I went to see that one he did with the gothic house, Tom Hiddleston... Can't even remember what it's called now! But I enjoyed that one despite many flaws (including the old "not scary at all" flaw).

Del Toro's a bit like Tarantino in that he is obviously obsessed with films and he writes very well about them too, but his films - while hugely artful - are somewhat smothered and suffocated by this knowingness about films he has. That's presumably why he struggles to make an actually scary horror movie.

Pan's Labyrinth is no doubt drawing on all manner of sources in film and fiction but it still felt, to me, Sui generis.

I'd agree with you broadly. I've seen all of the above, and saw that gothic one in the cinema for some reason. None of them I hate, but none of them I really like at all. What was it that made Pan's Labyrinth (or what's it called originally? Why did they rename it with an irrelevant name?) good for you?

Has anyone seen Destination Wedding?

I appreciate that's not a very helpful answer. I never know what to say to those, if I just hanging I feel like I'm being rude, but answering and saying "no" isn't that useful either. And really it just means me, maybe someone else has seen it, so I should have been more precise.

9Again, not a totally horrible film (but where else to talk about not particularly important, not especially good films?) but we just watched American Made the Tom Cruise vehicle from a few years back. In one sense it IS a crazy story about a pilot who gets hired by the CIA to take photos of Central American militias, then starts flying cocaine for the Medellin Cartel and then is caught by the DEA and forced to work for them - but at the same time it's also a familiar story, we basically know that the CIA was involved in drug smuggling and, more importantly for the film, we've seen this arc countless times before; crazy guy gets involved with drugs/guns and money, at first it goes well and he's coining it in, got too much to spend and is burying it in the garden and drinking champagne made of diamonds or whatever, before it turns dark and the walls start closing in and it's time to pay the price for his actions... with a final chance of some kind of redemption.
The issue for me was really Cruise, he plays it exactly as you've seen him so many times before, the gung-ho, grinning (short) action hero who is always one step ahead of his enemies, barely flustered by the stakes and the risks to himself and his family and so on. And this is where it fails - I watched Uncut Gems the other day and, although I was very mixed in my feelings for the film on the whole, what it did do was convey this sense of the main guy and the stress he felt, the tension in every event, the actual fear when threatened by the small time gangster and his reasonably intimidating heavies. But if you can smell the desperation of a dodgy jeweller under threat of some broken legs or a serious kicking - ok, at the end, aware that his life could be forfeit - shouldn't a guy who is being chased by the FBI, the DEA, local law enforcement, the fucking Escobar cartel and possibly the Nicaraguan army for good measure... shouldn't he be a little more concerned than shouting hurry up every now and again? Why can Adam Sandler make you feel at moments what it might be like to be in that situation and Tom Cruise can't even get close?
I don't know the answer but that was the difference.

Owen Wilson gets stuck... behind enemy lines... and essentially runs through Bosnia pursued by cardboard cutouts of Eastern Europeans in military gear and tracksuits, singlehandedly uncovers the genocide in the process and somehow doesn't get shot to bits doing completely stupid shit. The soundtrack's basically all big beat except for the odd bit of moody music and Feeder's Buck Rogers and the editing is about as late 90s/early 2000s as it gets. There's also a scene where he asks some kid for water and they say they don't have any, only this and hand him a brand new bottle of coke which he drinks as though it's even better...

I'm Thinking of Ending Things, new one on netflix

No country for old men. Good action/suspense scenes, and good general mood, but ultimately a bit soulless/empty plus too big a suspension of disbelief (him going back with water) for me to buy.

Stumbled into random Nottingham sketchiness on the screen

It's alright, but very dated now and the thing itself is terrible. Cool on paper, but it's just a big guy running around making noises then getting set on fire and electrocuted. Everyone's strangely casual about encountering and fighting a hostile alien too. 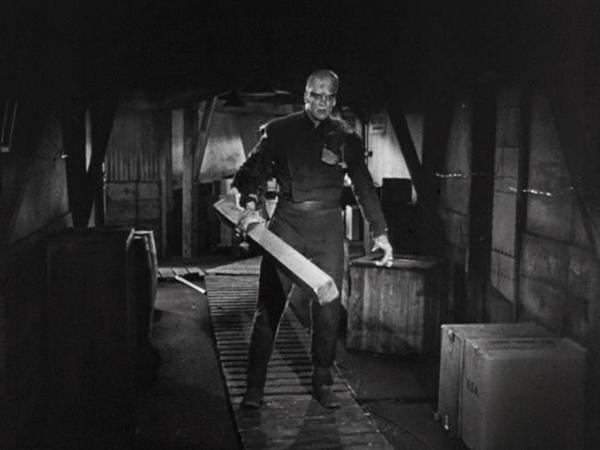