man this new shit Gambia Boy is bringing be on some other level...

I'm sure it's already been said in this thread, but stronger stuff means you can smoke less, which is in general a good thing.

Research also seems to be pointing towards the fact that some people are genetically pre-disposed to negative reactions, including psychosis and adverse memory effects.

Polymorphism in the catechol-o-methyltransferase Val158Met gene appears to be the key, carriers of the Val allele are more likely to have bad reactions to THC, compared to carriers of the Met allele.

The A[dvisory] C[ommittee on the] M[isuse of] D[rugs] report published yesterday concludes that evidence on its mental health links is not strong enough to justify changing the status of cannabis to class B. "The current evidence suggests, at worst, that using cannabis increases the lifetime risk of developing schizophrenia by 1%."
Click to expand...

I find that trying to follow the average thread on the thought forum increases the risk of schizophrenia by at least 3%.

Strucstar said:
I thinks its fair to say that different drugs will affect different brains in different ways at different times. Skunk is a different drug to the 5%THC cannabis that my parents were toking in the late 60's. Genetically engineered bud that has THC levels over 20% is an odd thing in its self.
Click to expand...

This is an urban myth though, isn't it? It's not like weed producers have access to Monsanto-style laboratory equipment, is it? You can change the characeristics of plants or animals just by breeding those characteristics into them (especially a plant like cannabis which reproduces sexually, I should imagine), and people have been doing just that for thousands of years.

luka said:
it's not genetially engineered. its a product of selective breeding which is quite different.
Click to expand...

well, not really: you can change something much quicker by messing about with its DNA directly, but selective breeding can achieve the same effect - it's just much slower.

Strucstar said:
My bad, but its not that different, its just a longer road to the same destination (stronger weed). right?...
Click to expand...

isn't quite right - the very strong stuff around today has been bred for THC content at the expense of cannabidiol (CBD) which is an antipsychotic and, in trad weed or hashish, helps ameliorate the brain-frazzling effects of the THC.
Last edited: Feb 21, 2008
N

Mr. Tea said:
the very strong stuff around today has been bred for THC content at the expense of cannabidiol (CBD) which is an antipsychotic and, in trad weed or hashish, helps ameliorate the brain-frazzling effects of the THC.
Click to expand...

The other big drawback () being that it generally isn't hand rolled on the thighs of Nepalese maidens which in studies has been shown to contribute to the positive effects.
T

Mr. Tea said:
isn't quite right - the very strong stuff around today has been bred for THC content at the expense of cannabidiol (CBD) which is an antipsychotic and, in trad weed or hashish, helps ameliorate the brain-frazzling effects of the THC.
Click to expand...

This isn't quite right either. CBD is apparently not psychoactive, but is a sedative, so the reason that cannabis with THC & CBD is less likely to cause psychotic could be because it's a sedative rather than an anti-psychotic. It does appear that CBD works a little like an atypical antipsychotic, but the sample size of the studies are pretty low at the moment (2 or 3 patients) at the few I looked at.

As ever, more research is needed.

CBD also produces the more "stoning" type effects found in indica type strains, as opposed to the "high" of THC.

tryptych said:
This isn't quite right either. CBD is apparently not psychoactive, but is a sedative...
Click to expand...

Surely a sedative is, by definition, psychoactive?

Anyway, saw this today: Cannabis laws to be strengthened

Wonder if they're going to be 25 times stronger than they used to be?
C

This reminds me - what happened with British hookah bars, did they evade the ban? I'm sure there are still some operatiing.

This reminds me - what happened with British hookah bars, did they evade the ban? I'm sure there are still some operatiing.
Click to expand...

Unfortunately not. I think there was talk of them being allowed to operate normally as members-only clubs, but then they decided that even members-only clubs had to comply with the ban on indoor smoking. It's utterly fucking ridiculous, I mean the WHOLE POINT of these places is that you go there to smoke, it really *is* the equivalent of banning drinking in a pub. Why they couldn't have made some exception I don't know, but then, I guess that wouldn't have been nearly bureaucratic and authoritarian enough for this government.
C

I got a job in a hookah bar and was shocked, shocked to find smoking was allowed.

crackerjack said:
I got a job in a hookah bar and was shocked, shocked to find smoking was allowed.
Click to expand...

*hilarious gag based on misunderstanding of the work 'hookah'*

The fucking Independent just beggars belief sometimes. Their headline today was "Sacked for telling the truth", about David Nutt's dismissal from the ACMD after he said that cannabis was less harmful than alcohol and that reclassifying weed as class B and keeping ecstasy as class A was unwarranted. (Apparently he was guilty of the heinous crime of "sending out the wrong message" - the right message, presumably, being "using recreational drugs other than the two state-sanctioned ones that rake in billions of pounds in revenue each year is a cardinal sin".) This is the paper that, just a couple of years ago, had the headline "Cannabis: an apology" - reversing its earlier pro-decrim stance and peddling the old line about how the KILLER DEATH SKUNK flooding Britain's streets really is 25 times stronger than the harmless 'pot' so many of our establishment luminaries furtively puffed on as students, liable to turn you into a twitching zombie after a single spliff &c. &c.

David Nutt had the last laugh. You can access a legal cannabis prescription more easily than ever in Britain because of his work. Working with opiate and benzo users caught in spiralling circumstances I’d prefer to refer someone to new pro-cannabis patient advocacy groups, particularly those who got into painkillers after accidents or botched surgeries. Would mean immediate dismissal but external agencies are doing it increasingly, so overall outcomes are improving

There’s a flirtatious debate about opiates being oversubscribed in this country. It’s a fallacy. You’re far more likely get an appallingly supervised antidepressant. Opiates have been a US bomb. To get Oxy here you have to be dying. It isn’t even prescribed for major orthopaedic surgery, which says it all

Still the epitome of nuts how the US market exploded. A comparison of opiate use across pre-cannabis decriminalised states and those in a post-legalisation environment would be timely (sure the data’s out there already), harm reduction and education being among the central, long-term aims 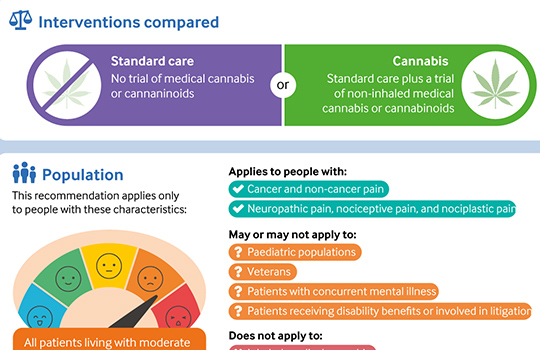 Clinical question What is the role of medical cannabis or cannabinoids for people living with chronic pain due to cancer or non-cancer causes? Current practice Chronic pain is common and distressing and associated with considerable socioeconomic burden globally. Medical cannabis is increasingly...

Dosing should be individualised and informed by titration, after starting at the lowest plausible therapeutic dose. For example, daily oral doses range from 2.5 mg to 40 mg for dronabinol, from 0.2 mg to 6 mg/day for nabilone, from 1 to 16 oral sprays for nabiximols (dronabinol/cannabidiol), and from 5 to 20 mg/kg/day for Epidiolex (an oil based extract of cannabis containing 98% CBD). Upper limits of dosages may vary between countries. Topical preparations theoretically require lower doses and stay local, therefore reducing harms associated with ingested forms of cannabis; however, commercial products typically lack pharmacokinetic data establishing their ability to cross the aqueous layer and remain localised.107108

The opioid sparing effects of medical cannabis for chronic pain remain uncertain due to very low certainty evidence.22 Clinicians may, however, consider medical cannabis as part of an approach to help facilitate opioid tapering among consenting patients. Importantly, forced opioid tapering is ineffective and may cause harm.109110
Advertised content of medical cannabis products may not be accurate. One US analysis of 84 products found that 26% contained less CBD than labelled, which could negate any potential clinical effect.111 Furthermore, with the exception of Epidiolex and Sativex, non-synthetic cannabinoids lack a drug identification number and cannot be prescribed by physicians, only authorised.

The bioavailability of oral preparations of medical cannabis or cannabinoids ranges from 13% to 19% and can take up to four hours to reach peak concentrations.107 Dronabinol, THC, and CBD are metabolised in the liver, via cytochromes P450 (CYP) 2C9 and CYP3A, and about a third of the molecules and metabolites are eliminated in the urine (remaining metabolites are eliminated in the faeces). Several metabolites of THC are considered psychoactive. The elimination half-life of dronabinol ranges from 25 to 36 hours, and its main metabolite (11-hydroxy-delta-9-tetrahydrocannabinol) is 44-59 hours; the half-life of CBD is 56-61 hours. The effects of medical cannabis or cannabinoids may be enhanced in patients with renal or liver impairment.

The panel focused on the perspectives of people living with chronic pain rather than those of society or payers when formulating their recommendation. As identified in our review of patient values and preferences, both legal availability of medical cannabis or cannabinoids and costs are likely to influence decision making.

I'd like to retrospectively nominate this thread for dorkiest title of all time.

i got really stoned on holiday but it was a mistake cos i'd had 7 large pivos of sweet orange lager as well as a few rakis. i did a half hour youtube dj set of some stone cold classics to great applause to most of the room, who were punks from the city. but then one of them said very loudly that he hated black music because of the dominance and aggression in it and the room started spinning round my head. to my credit, i said let's go straight away and luckily we went and i didn't fall or anything and just woke up ok the next morning, whereas in a previous life, i would have been sick everywhere or wet myself.
C

there's very few people i know now, 40+ i mean, who are still smoking ganja on the regular. everyone moves on and cuts it out at a certain point. i still love the odd doob but i came close to going wrong.

most of my old friends still smoke every day
C

the only guy i know who smokes every day is really nice and is sorted in a lot of ways, but i got other friends who've gone mental on it.