Not unexpected I guess... surely Suarez would represent a worthwhile risk to someone, he's still got magic ability even if he can't get above a waddle. Don't see him in the prem somehow though.

What's the betting he goes somewhere else, regains his form the way Coutinho did and everyone realises the problem was Barca once again?

I'm not sure... I think he is too slow for the very top level, but if he gets the ball in a decent position who would bet against him scoring? I think if a half-decent club made it their primary aim to get him the ball in those positions (which is not unreasonable cos they won't have a Messi to also think about) he could get a lot of goals... but that wouldn't necessarily mean Barca were wrong on him. I mean if he starts running again sure, that would prove he had been demotivated I suppose.

I think he should go to Italy.

Why not a slightly easier league... France or Portugal?

I was under the impression Italy was a bit slower, plus Serie A has a bit more shine to it than Ligue 1 and Primeira Liga.

It does indeed. But I just suggested cos we got a few ex-Liga players here... Pepe, Casillas etc

What in the 90s when Gazza and Platt went to Italy?

Yeah, C4 Sunday afternoons. That cunt James Richardson doing his best to wank all over it. Quality theme tune

I used to love it yeah. As far as I remember there had never been regular foreign footie on and, for most of the time I'd been following football, the English clubs had been banned from Europe so these exotic clubs held a totally magical excitement for me.

Anyway, I guess you've all seen that Messi has told Barcelona he wants to leave and play for Swindon Town (I assume) 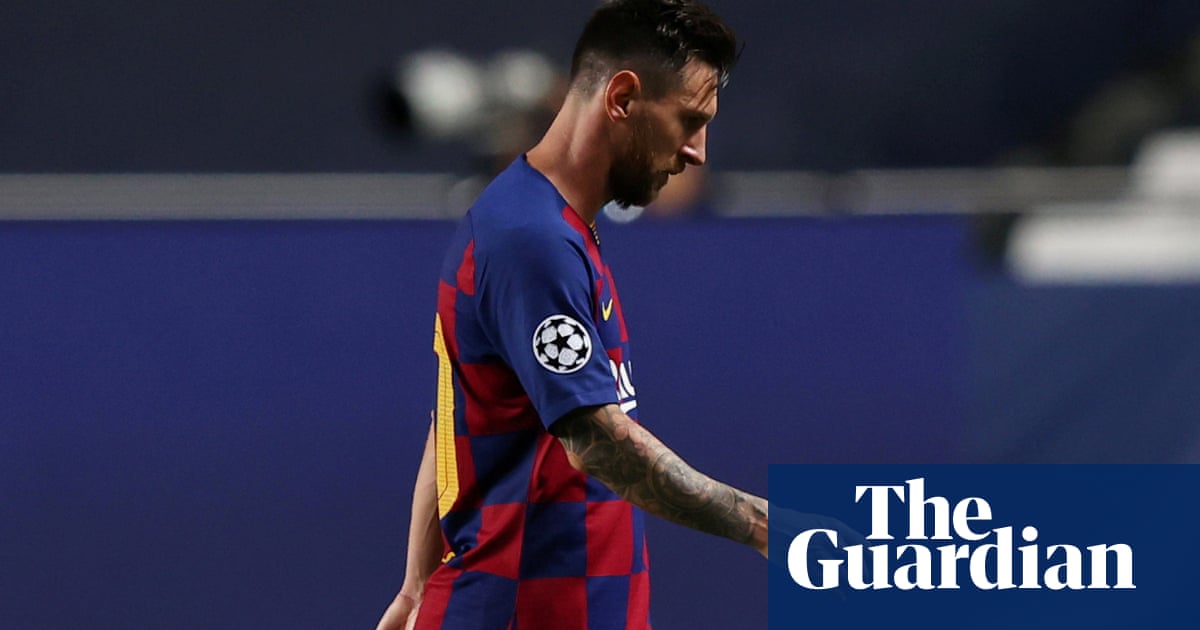 Messi’s camp believes that a clause in his contract means he can walk away for no fee. Barcelona, by contrast, insist that he is still bound by a €700m (£629m) buy-out clause.
Click to expand...

Even someone as cynical when it comes to Barcelona as I am would have to say that it would be a terrible shame if the end of his time there was consumed by legal wrangles and very visible bitter arguments.

I used to love it yeah. As far as I remember there had never been regular foreign footie on and, for most of the time I'd been following football, the English clubs had been banned from Europe so these exotic clubs held a totally magical excitement for me.
Click to expand...

Actually totally crazy to think about that now. To me - and with hindsight - it seems to ban a whole league's worth of teams cos of one club (OK, there was more to it than that but teams who had nothing to do with it were banned - collective punishment is against the Geneva Convention isn't it?) as well as being grossly unfair had a hugely deleterious effect on English football. What it did to the clubs of course, but also to the national side, and also to the development of young players coming through as the whole league was isolated and left behind. I think you could argue that the effects are still being felt now.
I cannot believe anything equivalent would happen or even be considered now, they can't even ban City, if they even thought about it the howls of anguish would only be drowned out by the speed-dialling of millions of lawyers. If United and City and Chelsea were told they couldn't play cos of an incident at a Liverpool match they would go instantly on the attack on all fronts and, in fairness, I think that they would have a fucking good case. It seems such a draconian and anti-football solution. I mean should any punishment or solution be designed such that it would actually stymie the development of the game in a whole country? What kind of body would want that for their sport?

Anyway, I guess you've all seen that Messi has told Barcelona he wants to leave and play for Swindon Town (I assume)
Click to expand...

Actually, contrary to my expectation above, I'm seeing a number of reports that he wants to play for Man City.

Agreed the English ban in Europe was a big pull. Without over indulging nostalgia it was a huge comedown session all round. What better way to pickle than to watch a Milan derby or Juve v whoever. Had a mate who started supporting Fiorentina for the simple reason they played in purple.

Worcester Sauce we used to call 'em. I guess those Walkers crisps came on the market about the same time.
L

Messi situation reminds me of Michael Jordan and Tom Brady. what is it that compels huge, successful stars to want a fresh start at the end of their careers?
Last edited: Aug 27, 2020

Well the way I see it, the biggest prize in club football (in Europe for sure but really in the world) is the Champions League, Messi wants to win it again before he retires. Barcelona are not gonna win it in the next few years, they are gonna try and rebuild a new team with a solid base that can build up to that of course, but realistically it's probably out of sight. Messi has the choice of being there for that rebuilding project while knowing he can't be part of the long-term plan.... or he could move aside and let them do that while he gets paid billions to have one last crack at the big time with City or PSG or whoever. I can see the logic of that, although of course it will be difficult to leave the club where he spent his whole career and so on.

City could be a good move for him, imo. They're much better positioned than Barca, the management aren't as clueless and there are familiar faces in the squad, coaching staff and boardroom. The only real downgrade would be having to live in England.
That being said, my gut says he should stay in Spain.

Play against Barcelona though? Would laugh like fuck if he scored a hatrick against them.