Some great analysis going on on Reddit re: El Clásico, 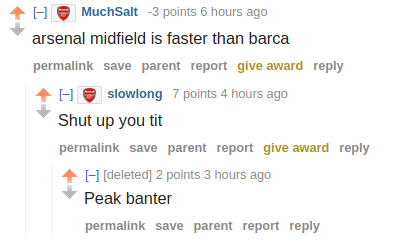 I don't understand why they they don't run faster

Think I might as well watch the next sacrificial victim be smashed into a bloody pulp by Bayern Munich....

Nothing will ever top Rangers going into administration, getting exiled and relegated.

I think the top two contenders are Font and Laporta; Font's the bloke who said he'd fire Koeman and hire Xavi.

Now they're two nil down in Monchengladbach... can Zidane stay?

IdleRich said:
Now they're two nil down in Monchengladbach... can Zidane stay?
Click to expand...

I think he should. He's brilliant.

You waited until they pulled two back to say that.

They've recently lost their greatest ever player in Ronaldo, his replacement's barely played due to injury, the league's becoming much more defensive and they won the title last season. I think Zidane's done enough to be given more time. Who would they replace him with anyway?

Yeah I'm not really saying he SHOULD go but rather, that if your last four games contain a loss to a newly promoted side, a home defeat in the champions league to a depleted Ukrainian team and then another defeat in the CL then that's traditionally been a very dangerous place for a Real manager to be.
Of course, one of those defeats is actually a draw and the other game was a victory at the Nou Camp.
And yeah, they won the league last time and he has an amazing record in the past.
Also maybe Barca and Real are kinda glad to both be going through a "rebuilding" (or "being shit") phase at the same time. It's easier to bear if your rival isn't playing glorious football and handing all comers their arses.
In fact Spanish league suddenly looks a bit shaky, their teams are getting beaten all round Europe. So the big two will probably be there or thereabouts in the league even in their much reduced form.

What is going on with Hazard though? I saw someone the other day saying he is without a shadow of a doubt the worst transfer in the history of football which seemed a little on the hard side.

He just keeps getting injured. He's also put on weight.