WashYourHands said:
Post the goal then you pickled cunt, Murphy

I don't think it's haphazard, he always had the ball. I feel that with a lot of "classic" dribbled goals there is a bit where he gets half-tackled and wins it back with a bit of good fortune and that spoils the otverall beauty of the goal but that didn't happen at all here.

There is the Weah one where he ran the whole lengtjh of the pitch but - while it seems churlish to complain - he didn't face as many challlenges as he probably ought to have.

and he got flukey too

jenks said:
as a friend pointed out - they had only been trying to score that goal for three seasons, eventually they would.
Click to expand...

But with those spectacular volleys everyone is trying to score them all the time. There must be several times every game that someone throws their foot hopefully at a ball flying past them so it's not surprising that someone connects perfectly every now and again.

was trying to get a Spurs dig in Rich, dribblers like Chris


as players have got shorter and zippier, better fitness, speed of movement n all that, some of the archive gems can look more of their time

luka said:
and he got flukey too
Click to expand...

Yeah, he got half-tackled as I was describing above. There is that famous one by Ronaldo (the first Ronaldo) which everyone rates a lot where he kinda bundled through everyone but, while it was an impressive demonstration of power and strength, it was a big too scrappy for it to ever be one of my favourites.

WashYourHands said:
was trying to get a Spurs dig in Rich
Click to expand...

It's never the wrong time for that.

Oh go on then

Video unavailable
This video contains content from Tottenham Hotspur Football and Athletic Co. Limited, who has blocked it from display on this website or application.
Watch on YouTube

One thing that bugs me is the way that The Guardian report football now. I enjoy women's football, I'm totally behind it and whatever, but this thing they do where they just call it football and make no distinction whatsoever is really quite annoying. I turn to the football page and it says "Liverpool beat Manchester City four nil" and I'm amazed... I didn't even know they were playing this week, what competition was that? And then I look at the scorers and don't recognise a single name, what's happening here? Oh, it's the women's football, Liverpool Women have beaten Manchester City Women, which is quite a different thing, I don't think it does anyone much good omitting the word "women". There are different tournaments, they play against different people... i am completely in favour of equality in football as in everything but I don't think that the way to bring that about is by making the reporting more confusing.

Anyway, Barcelona failed to qualifty for the knock out phase of the CL for the first time in 21 years or something.

“Today is the start of a new chapter for us,” Xavi admitted. “We have to start demanding a lot more of ourselves. We must use this as a turning point to change many things. We are going to face this reality with all the dignity in the world and work to bring Barça back to where we deserve to be, which is not the Europa League. It really annoys me to face our reality. I am angry. Barça does not deserve this.”
Click to expand...

How do they not deserve it? They got seven points from six games, they played shit and they lost. In fact they were very lucky to get a draw with Benfica last time out, it could have been worse. I like Xavi but statement doesn't sound good to me... you get what you deserve from how you play, not from who you are, maybe it's cos of the translation or something but that statement makes it sound as though he thinks Barcelona deserve to be in the CL simply cos they are Barcelona.

Anyway, I love Greenwood and I am glad to see him scoring, this one was really well taken, wouldn't have thought he had time to adjust into that position and club it in like that.

im supposed to be going to west ham tonight a friend got me a ticket. i never go to the football really particuarly as its always a low scoring draw when i do but hopefull tonight will be different west ham 10 dinamo zagreb 0 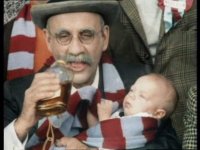 one of my earliest friends, pre-primary school was obsessed with Alf Garnett. i never knew what he was on about

A Euro tie the gaff‘ll be bouncing. Nights like these at Forest against solid continental teams with maniacal fans are long gone

have you got any tips for me if i want to get 'stuck in' against the croatians after?

Balkans love all that flag waving ultra on a loudspeaker rallying the troops theatre of the absurd. 95% of it is harmless but all these teams want to leave London on a high with a scalp. At least you know the area and its landscape

It can feel a bit weird being a big crowd again, but soon passes. Top buzz

good point i wont get 'stuck in' then

Balkans love all that flag waving ultra on a loudspeaker rallying the troops theatre of the absurd. 95% of it is harmless but all these teams want to leave London on a high with a scalp. At least you know the area and its landscape

It can feel a bit weird being a big crowd again, but soon passes. Top buzz
Click to expand...