Leo said:
Who's the favorite to win it this year?
Click to expand...

I actually don't know. The general rule is that it's always a European side or a South American one, the predicted African revolution never quite happened. I've seen people tipping Brasil and certainly they are the only South American side to have won it when it's not in the Americas - then again Argentina won the Copa America and this is surely Messi's last chance to win it so he's gonna go absolutely all out.

In fact in general there seems to be something in "home" advantage in that European sides have always won it when it's been in Europe except in 1958 when Brasil won in Sweden. When it's in the Americas then the South American sides seem to get something of a boost. However there here have only been two world cups outside of Europe/Americas which were Japans/S.Korea in 2002 which was won by Brasil and South Africa in 2010 which was won by Spain - so that tells us nothing really.

European sides have slowly become more and more dominant which would point towards the European Champions but both Italy and the runners up England look like they have gone backwards since then. On paper Belgium and, particularly, France look like the strongest teams.

I find it's generally quite an open tournament in that even the favourites are normally 7-1 or something so even the team considered most likely to win it is more likely not to win, if that makes sense.

I'd probably tip France just cos they've got really good players. I found these odds from Bet365

All odds courtesy of bet365 are correct at the time of publishing and are subject to change.
Click to expand...

Well, I think I've answered that question pretty thoroughly while at the same time not at all.

Being Portuguese, they're the ones I root for first. Once they get booted out, I usually switch to Brazil (for the Portuguese connection) and England (for the marital one). I've never rooted for the US, still doesn't seem like we belong on that level. First two US matches are against Wales and England.

Part of me feels I ought to cheer for my country of residence... but I sort of feel that life would be completely unbearable if they actually won it.

The weird thing is, I pretty much hate England and everything it stands for, obviously I've moved abroad and have no intention at present of moving back, but when it comes to football I really really want them to win so much. Wales could easily be my second team as my nain was pretty much my favourite relative and also she was passionate about sports - mainly rugby - but Wales are even worse than England so they make a rubbish second team. Actually it's totally unfair to say "even worse than England" cos the England side of the last few years is pretty much the best one of my lifetime, both on paper and in terms of results, it's just ingrained in me to think they're rubbish.

less than 2 weeks to this year’s controversial event but admittedly I’m buzzing - predictions:

fwiw England might win but can fuck off regardless, plenty more years of hurt please fitba gods

dunno, Brazil? not seen enough champions league or copa-l to get a grasp of form among key cohorts
V

People seem to feel the stars are aligning for Messi and Argentina to win it.

It's here! So... who will be watching the opening clash of titans as Quatar take on Ecuador? Or have FIFA, against all the odds, finally found a way to destroy the seemingly invincible football brand?

VARd off what a con!

OK penalty and now it is one nil... Qatar look like they've never played the game before.

Massively compromised tournament but I get to dump on England - everyone wins!

See what you mean about Qatar, Rich, like watching Mansfield

So far so good
V

"Budweiser will give the winning country all the beer prepared for the QatarWorldCup2022 worth of €75 million. It is also expected that the company will sue FIFA for breach of contract."

Saka shinned his, Sterling was a clear miss hit

version said:
"Budweiser will give the winning country all the beer prepared for the QatarWorldCup2022 worth of €75 million. It is also expected that the company will sue FIFA for breach of contract."
Click to expand...

Wales are terrible, what happened to the team that beat Belgium six years ago...

Fuck so that guy is George Weah's son?
V

Wales were tepid, the occasion possibly, more fluid after an hour. England have nothing to worry about, still think their team aren’t scarred as deeply as previous shirt bearers were, not just pretty boys for once even though the sport is full of cheating cunts. Ribbing aside, wasn’t expecting degrees of cohesion 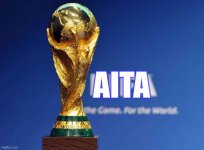 Attention seeking of the highest order. The bloke is about 50 odd dressed as a knight
Click to expand...

Yeah but I don't think that there was a retirement age for knighting. If you could still hold a sword and hit people with it you could be a crusader. It was equal opportunities in fact, not just the age thing, it didn't matter if you were black or white, gay or straight, when you pulled on that helmet then it was just down to what you could do, not who you were. As long as you were both willing and able to abandon your entire life, travel to the other side of the world and slaughter anyone who got in your way then you were in - people want to pretend that's "wokeism" or something but that's just how it was. History has been re-written to hide how progressive the crusaders were; for example, while they were rampaging and killing their way to Qatar or Jerusalem or wherever it was they always respected the local customs and never drunk alcohol. I bet that no crusader would have ever said "get back to fuckheadistan" either.
You must log in or register to reply here.
Share:
Facebook Twitter Reddit Pinterest Tumblr WhatsApp Email Share Link
Top