oh, and the recent terre thaemlitz one as well
F

I love that Terre Thaemlitz interview. Definitely the best I've seen. Midtown 120 Blues is a great album, isn't it?

Incidentally, love this Guy Called Gerald: http://www.youtube.com/watch?v=5-WGyC0s3vs (amongst many others)

Dunno if anyone who's not from Manny will be interested in this (and I'm guessing massrock definitely won't be!) but if anyone wants to see that documentary Gerald was showing about Hulme in full, it's here:

Couldn't really make it out on the RBMA vid. Would have thought they could manage some kind of direct feed for video, but I guess not.

Thanks for flagging up these interviews in the first place btw massrock. Not come across them before. Gonna start digging through the archives now. Benji B dropped a great Jay Electronica joint on his show at the weekend so I might start with that one whilst I'm in the mood.
G

not watched any of the rbma vids in length though i saw a bit of the skepta one and was surprised that he seemed to be - albeit reluctantly - going into a bit of detail about his production.
C

I recently read something like this about a guy Daft Punk sampled for 'One More Time'. Apparently they've been paying royalties, but some label owns the rights so the actual artist hasn't seen anything from it.

Sometimes I wonder what other music would have come out if there were alternative methods of distribution back in the day, as opposed to slavery contracts and album/single quotas, all of which made by suits without a shred of soul in their bodies taking the majority of the profit. The knock-on effect of that system being that certain music becomes forgotten because it's no longer in the label or publishing rights owner's interest to push it because the next thing came along. They were telling Prince his self titled album wasn't going to sell. They told him Kiss would never work because there was no bass. These are the same type of execs who keep hollywood making remakes and superhero bullshit because they know it's a safe bet. Imagine if more Princes were allowed to actually explore their creativity instead of being forced to make another guaranteed hit. I think the creative state we're in right now is directly related to this system of business-minded music making.

And I get that the internet has changed things, but for some reason which I'm still trying to figure out, we aren't getting many Princes or Beefhearts or whoevers nowadays.

It was quite funny when it happened in reverse to The Verve, though.
W

Little known facts : I never made one penny from sales of Voodoo Ray or the Hot Lemonade LP which were released on Rham Records, a British independent record label based in Wallasey, Merseyside, England. It ceased ‎operations in ‎1992 when Peter Leay, the owner disappeared, after him telling me the bad news about the collapse of the record's early distributor Red Rhino. That’s when I put an independent management team together so I could continue doing music.
Peter Leay had ran off with what was going to be my future. I had plans to build a studio in Manchester to develop artists like me. In the end I had to sign Subscape with Sony/CBS where I had to focus on the GCG artist project. We found Peter Leay, who had moved on from the music business and we got him to sign my music back to me but all the original money had got tied up in a Merseyside corner shop.
Meanwhile all this was going on, I was still having problems with 808 State. I was a 22 year old with a 24 track mind touring the world but my feet were planted firmly on the ground...
In 2019 the guy who was the assistant to Peter Leay restarted the Rham label not knowing what he has got himself into... His only thought to steal my music? Why would the assistant of Peter Leay re-start Rham who never paid its bills for decades and is now working stealing my royalties through an illegal Spotify page where they use my name and likeness and intellectual property with no permission ...... it never ends. I’ll keep you posted on THE CURSE OF VOODOO RAY
Click to expand...

Gerald recently put out some music, really different from his previous sound(s)

“I am fascinated by the science of sound. Silent Sound Spread Spectrum (SSSS) or S-Quad or Squad is allegedly a technology used by the US Department Of Defence that uses subliminal programming carried over ultra-high frequency broadcast waves. With this system, planting inaudible messages directly into the subconscious becomes very easy to do and everyone is susceptible.

"This composition is about 50 mins and it follows no specific style. It should leave the listener refreshed and relaxed.

"It was recorded using a system that enables you to keep full definition at low volume.

Ah actually it looks it was made and released in some form in 2013, but went up on his bandcamp a few months ago

A trip through electro, indie rock, dark wave sets the mood for Dark Fire; a soundscape opening a new door to view a distant but familiar picture.

Szafran (pronounced Sha-fran) is a Polish Berlin resident who, in recent times, has made his mark upon the deeper sides of techno, house and electronic music. He's known for playing live in the twilight zones of European clubland and festivals and now for the kind of longer extended dj sets usually reserved for djs with bigger riders than their record collections.

Not keen on the vocal with that one...
W

It’s time to end this. My work is blatantly being taken advantage of, again, and I’m reaching out to you, asking for your help to stop this crook who is stealing from me.

This company doesn’t have the right to profit from my music.

While I now have everything that I need to mount a legal challenge, I need your help to cover the legal fees. It looks like it’s going to take about £20,000 to turn this around.
Click to expand...

“I am fascinated by the science of sound. Silent Sound Spread Spectrum (SSSS) or S-Quad or Squad is allegedly a technology used by the US Department Of Defence that uses subliminal programming carried over ultra-high frequency broadcast waves. With this system, planting inaudible messages directly into the subconscious becomes very easy to do and everyone is susceptible.

"This composition is about 50 mins and it follows no specific style. It should leave the listener refreshed and relaxed.

"It was recorded using a system that enables you to keep full definition at low volume.

Ah actually it looks it was made and released in some form in 2013, but went up on his bandcamp a few months ago

An impressive, immersive experience with this production

Played last night outside mid volume with bats picking off midges. Slowly, at first its sounds seemed disconnected, yet its gradually repetition of key elements and (((wanna say dubby bass but that’s not exact))) are akin to a fusion between Scorn and Jah Wobble and even then I’m missing the target

Bought pronto, as a longer format it fucking works
T

yeah this is really trippy.
B 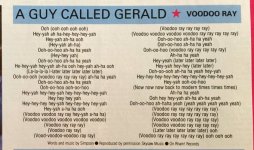 on making the greatest album of all time, 28 gun bad boy

Did geralds stuff ever get played on pirates and in raves in London at the time? I'm guessing not but maybe there was some tunes that did? (I'm not talking about voodoo ray obviously, I mean his breakbeat stuff)