version said:
The feds nudging the mentally ill and political extremists along feels like different territory to explicit mind control experiments, but maybe the latter just isn't even necessary when you can do the above.
Click to expand...

It's all shooting sprees and terrorism now innit. The serial killer thing is so 80s

luka said:
they were all unprecedented acts and in each case it was the first killing and the first insult
Click to expand...

From this one must conclude the identity of the killer is not a constant, and that perhaps woops has reinvented himself between kills.

Alternatively, when playing online shooters, sometimes a kill streak does not register when the internet connection dodges out between kills.

I had @woops as a pistol man wielding a customised little woops, blonds swooning on the river bank in the sun
V

Woops: A Killer with an Index.

william_kent said:
I'd go big and chuck the Son of Sam murders in as well ( .44 used to kill courting couples in their cars ), was probably two people at each murder, one shooter, one filming, Berkowitz as the fall guy
Click to expand...

I was thinking that this story reminded me a little of that Doctor in LA as discussed in numerous other threads who is one of the prime suspects for the Black Dahlia killing. He was suspected of being involved in satanic rites, he hung around with Man Ray (and maybe other artists I forget?) and some of Man Ray's artworks were believed to be related to or inspired by the way that the boy of the Black Dahlia was mutilated - or could it have been the other way round? And some people have even suggested that he might be the Zodiac Killer as well.

These links always seem a big fanciful but the similarities in the overall narratives here are striking - both doctors, both practising satanic rites, both mutilated and murdered women, both associated with artists who documented the murders... and both accused of being the Zodiac Killer on top of that.
V

I read David Lynch talking about the Black Dahlia the other day. 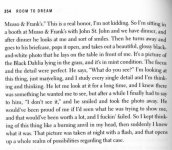 version said:
I've seen someone suggest they're running experiments or black ops stuff and trying to cover up any casualties, but who knows. There are apparently a lot of drugs moving around, so maybe some of it's drug deaths and killings tied to trafficking along with freak accidents, internal friction and whatnot rather than anything too spooky.
Click to expand...

That would be the most obvious explanation wouldn't it? I mean, without knowing anything else about the situation at all except for the bare fact that there is a US military base on their own territory which has an extremely high number of unexplained casualties, a good guess would be that the soldiers from that base are being used to carry out secret missions that can't be owned up to and when they die in the process of trying to steal back the voting machines from Germany or to quietly assassinate Nonce Andrew so that it looks like an accident, then the Army/Government have to pretend it was a suicide or a camping accident. I wonder if they can notify the family that in actuality their child died trying to save people from the royal paedo... maybe for years or even decades they have to live in ignorance.

I think that's a valid argument. In fact I'd go further in that for someone to be a serial killer they need to meet a number of criteria, of which having killed a few people is but one. So the burden of proof is on anyone trying to show that he is a serial killer when at the moment all we know is that he's killed three people.

WashYourHands said:
Does anyone else occasionally feel violently about Tea? It comes in waves

Dissociative states are intriguing phenomenologically. You might find yourself driving to Devon tooled right up but unable to remember or figure out why, quite perturbed turning round at Worcester price of fuel too. Serial killers will be walking more in Britain

Ruptures are unpredictable but if you get your ten best psychics and occultists working on seeding suicidal thoughts on their target, even a placebo gives you a 30% bounce. Soviet era chess shenanigans are an adjunct internet cul-de-sac
Click to expand...

WashYourHands said:
Ruptures are unpredictable but if you get your ten best psychics and occultists working on seeding suicidal thoughts on their target, even a placebo gives you a 30% bounce. Soviet era chess shenanigans are an adjunct internet cul-de-sac
Click to expand... 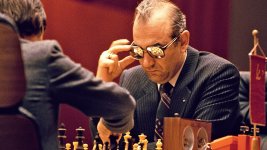 People from this sect called Ananda Marga, who believed in yoga and meditation and what have you, met up with Viktor and they suggested to him that they could help him, and it all sounds rather fantastic, but the bizarre thing was, it worked! When Viktor re-emerged with the Ananda Marga people in saffron robes sitting in the audience, rather than Viktor being spooked by Zukhar, the Soviets were spooked by these strange-looking people wearing saffron robes.
Click to expand...

version said:
Anyone looked into the MKUltra angle re: certain American serial killers? @william_kent @luka @Corpsey @WashYourHands ? I've heard mixed things about Chaos and Programmed to Kill, but apparently they both deal with that stuff.
Click to expand...

Chaos is a bit of a mixed bag, but it provided me with confirmation bias regarding some of my pet theories about Charlie - interesting, to me, were the parts about Joly West ( of MKUltra fame ) being involved with the Haight Asbury Free Clinic where the family were regulars, the role of Charlie's parole officer ( or handler? ), and "Operation CHAOS" ( MHChaos )... also entertaining was the character assassination of Vincent "The Bug" Bugolosi ( wife beater, stalker, abuse of power when stalking victim tried to complain, oh, and a total liar )

I've not read Programmed To Kill yet, but the phrase is taken from one of the "Son of Sam" letters - Berkowitz was ex-military, people who knew him say he returned from his years of service as a completely different man... the last two years have been highly entertaining in the "Son of Sam" world, it's been like watching a soap opera as factions form and break apart acrimoniously, lots of backbiting, backstabbing, and mudslinging amongst the "researchers" - I'm loving it

Yeah, I'm kind of obsessed with it to the point that I'm always trying to find ways of shoehorning it into tangentially related conversations...
V

Sirhan Sirhan and the Bobby Kennedy assassination are a real rabbit hole.

Pease believes Sirhan had been hypnotized and was firing blanks...
Click to expand...

... among that evidence is the autopsy finding that Kennedy was shot point blank in the back of the head, while Sirhan was in front of Kennedy. Witnesses at the scene of the shooting were adamant that Sirhan never got close enough to fire at close range...
Click to expand...

An expert in hypnosis from Harvard Medical School, Dan Brown, began meeting with Sirhan in 2008 and found him not only easily hypnotized, but also still easily triggered to re-create aggressive shooting moves out of nowhere. Brown submitted affidavits for Sirhan’s appeal stating that he believed Sirhan was an actual “Manchurian Candidate,” manipulated to perform bad acts against his will.
Click to expand...

william_kent said:
Joly West ( of MKUltra fame ) being involved with the Haight Asbury Free Clinic where the family were regulars ...
Click to expand...

Yeah, apparently he went to see Jack Ruby just before Ruby lost his mind too...

version said:
Yeah, apparently he went to see Jack Ruby just before Ruby lost his mind too...
Click to expand...

yeah, he got around..

version said:
Yeah, apparently he went to see Jack Ruby just before Ruby lost his mind too...
Click to expand...

he caused Tusko to lose his mind and die 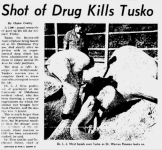 Conducted by Dr Louis Jolyon "Jolly" West and two colleagues, the experiment took place in 1962 at the University of Oklahoma. West's stated intention was to see whether LSD - yet to hit the streets as a recreational drug - would induce a condition called musth in Tusko. Musth, which occurs naturally in all bull elephants, is a period of heightened testosterone production and high aggression. Why West should have been interested in this is unclear, though he has repeatedly been linked to the CIA's MK Ultra programme, which had been experimenting with LSD on unwitting subjects like Tusko since 1953.

Tusko, "the prize of Oklahoma City Zoo", was injected with 297mg of LSD, an enormous dose even for an elephant, and more than 30 times what a three-tonne human might receive. After five minutes, Tusko trumpeted, fell over, defecated and began shuddering violently; his pupils dilated, his legs became stiff, he bit his tongue and his breathing became laboured.

Twenty minutes later, in an attempt to calm him, a large (again, almost certainly too large) amount of the anti-psychotic Thorazine was injected into the elephant, probably inducing a massive drop in blood pressure and heart palpitations. It didn't help; after another hour West pumped Tusko with a tranquilliser, and a few minutes later he was dead. The whole process took one hour and 40 minutes.
You must log in or register to reply here.
Share:
Facebook Twitter Reddit Pinterest Tumblr WhatsApp Email Share Link
Top